The role of nation-state actors in cyber attacks was perhaps most widely revealed in February 2013 when Mandiant released the APT1 report, which detailed a professional cyber espionage group based in China. Today we release a new report: APT28: A Window Into Russia’s Cyber Espionage Operations?

This report focuses on a threat group that we have designated as APT28. While APT28’s malware is fairly well known in the cybersecurity community, our report details additional information exposing ongoing, focused operations that we believe indicate a government sponsor based in Moscow.

In contrast with the China-based threat actors that FireEye tracks, APT28 does not appear to conduct widespread intellectual property theft for economic gain. Instead, APT28 focuses on collecting intelligence that would be most useful to a government. Specifically, FireEye found that since at least 2007, APT28 has been targeting privileged information related to governments, militaries and security organizations that would likely benefit the Russian government.

In our report, we also describe several malware samples containing details that indicate that the developers are Russian language speakers operating during business hours that are consistent with the time zone of Russia’s major cities, including Moscow and St. Petersburg. FireEye analysts also found that APT28 has systematically evolved its malware since 2007, using flexible and lasting platforms indicative of plans for long-term use and sophisticated coding practices that suggest an interest in complicating reverse engineering efforts.

We assess that APT28 is most likely sponsored by the Russian government based on numerous factors summarized below: 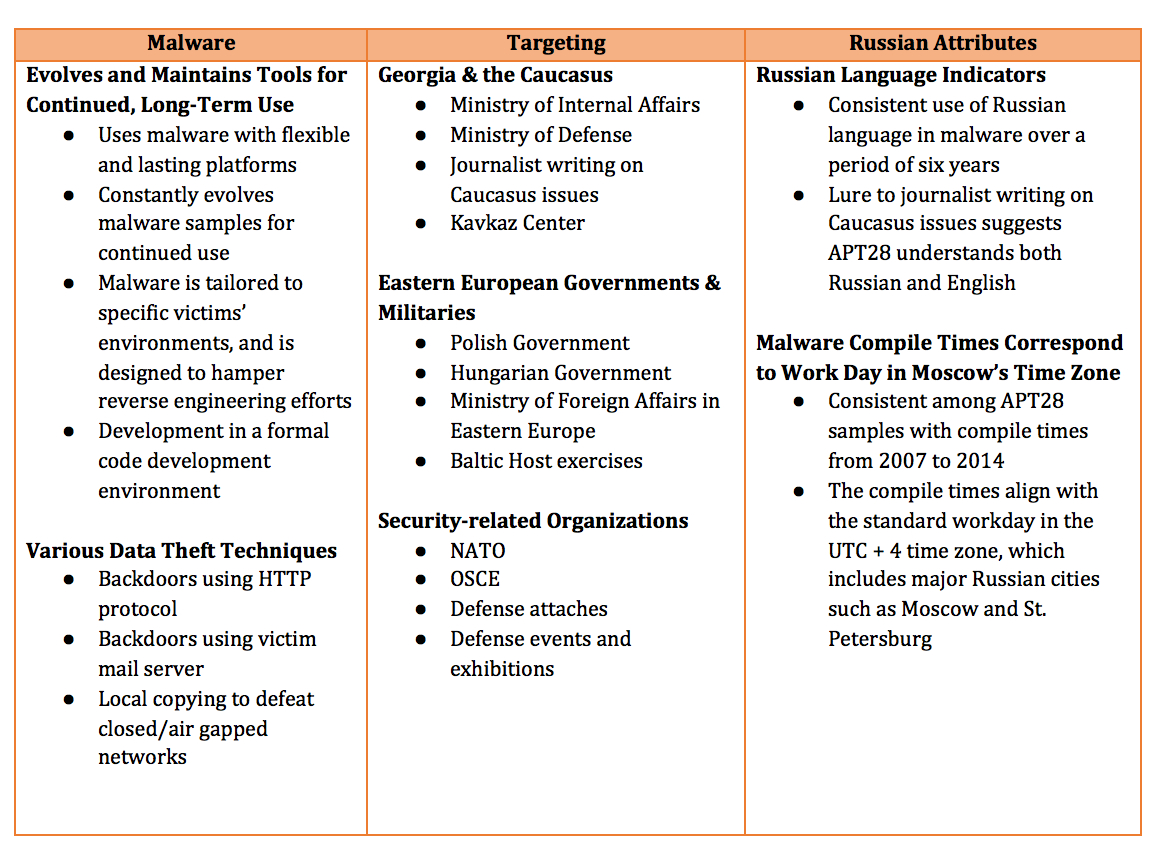 FireEye is also releasing indicators to help organizations detect APT28 activity. Those indicators can be downloaded at https://github.com/mandiant/iocs.

As with the APT1 report, we recognize that no single entity completely understands the entire complex picture of intense cyber espionage over many years. Our goal by releasing this report is to offer an assessment that informs and educates the community about attacks originating from Russia. The complete report can be downloaded here: /content/dam/legacy/resources/pdfs/apt28.pdf.