BACKSWING - Pulling a BADRABBIT Out of a Hat

On Oct. 24, 2017, coordinated strategic web compromises started to distribute BADRABBIT ransomware to unwitting users. FireEye appliances detected the download attempts and blocked our user base from infection. During our investigation into the activity, FireEye identified a direct overlap between BADRABBIT redirect sites and sites hosting a profiler we’ve been tracking as BACKSWING. We’ve identified 51 sites hosting BACKSWING and four confirmed to drop BADRABBIT. Throughout 2017, we observed two versions of BACKSWING and saw a significant increase in May with an apparent focus on compromising Ukrainian websites. The pattern of deployment raises the possibility of a strategic sponsor with specific regional interests and suggest a motivation other than financial gain. Given that many domains are still compromised with BACKSWING, we anticipate that there is a risk that they will be used for future attacks.

Beginning on Oct. 24 at 08:00 UTC, FireEye detected and blocked attempts to infect multiple clients with a drive-by download masquerading as a Flash Update (install_flash_player.exe) that delivered a wormable variant of ransomware. Users were redirected to the infected site from multiple legitimate sites (e.g. http://www.mediaport[.]ua/sites/default/files/page-main.js) simultaneously, indicating a coordinated and widespread strategic web compromise campaign.

FireEye network devices blocked infection attempts at over a dozen victims primarily in Germany, Japan, and the U.S. until Oct. 24 at 15:00 UTC, when the infection attempts ceased and attacker infrastructure – both 1dnscontrol[.]com and the legitimate websites containing the rogue code – were taken offline.

Strategic web compromises can have a significant amount of collateral targeting. It is common for threat actors to pair a strategic web compromise with profiling malware to target systems with specific application versions or victims. FireEye observed that BACKSWING, a malicious JavaScript profiling framework, was deployed to at least 54 legitimate sites starting as early as September 2016.  A handful of these sites were later used to redirect to BADRABBIT distribution URLs.

FireEye iSIGHT Intelligence tracks two distinct versions of BACKSWING that contain the same functionality, but differ in their code styles. We consider BACKSWING a generic container used to select attributes of the current browsing session (User-Agent, HTTP Referrer, Cookies, and the current domain). This information is then relayed to a “C2” sometimes to referred to as a “receiver.” If the receiver is online, the server returns a unique JSON blob to the caller which is then parsed by the BACKSWING code (Figure 1).

In Version 2 (Figure 3), BACKSWING retains similar logic, but generalizes the InjectionString to be handled strictly to render the reply into the DOM.

Malicious profilers allow attackers to obtain more information about potential victims before deploying payloads (in this case, the BADRABBIT “flash update” dropper). While FireEye has not directly observed BACKSWING delivering BADRABBIT, BACKSWING was observed on multiple websites that were seen referring FireEye customers to 1dnscontrol[.]com, which hosted the BADRABBIT dropper.

The compromised websites listed in Table 1 demonstrate one of the first times that we have observed the potential weaponization of BACKSWING. FireEye is tracking a growing number of legitimate websites that also host BACKSWING underscoring a considerable footprint the actors could leverage in future attacks. Table 2 provides a list of sites also compromised with BACKSWING

The distribution of sites compromised with BACKSWING suggest a motivation other than financial gain. FireEye observed this framework on compromised Turkish sites and Montenegrin sites over the past year. We observed a spike of BACKSWING instances on Ukrainian sites, with a significant increase in May 2017. While some sites hosting BACKSWING do not have a clear strategic link, the pattern of deployment raises the possibility of a strategic sponsor with specific regional interests.

BADRABBIT is made up of several components, as described in Figure 5.

The install_flashplayer.exe payload drops infpub.dat (MD5: C4F26ED277B51EF45FA180BE597D96E8) to the C:\Windows directory and executes it using rundll32.exe with the argument C:\Windows\infpub.dat,#1 15. This execution format mirrors that of EternalPetya.

The infpub.dat binary is the primary ransomware component responsible for dropping and executing the additional components shown in the BADRABBIT Components section. An embedded RSA-2048 key facilitates the encryption process, which uses an AES-128 key to encrypt files. The extensions listed below are targeted for encryption:

The following directories are ignored during the encryption process:

The malware writes its ransom message to the root of each affected drive with the filename Readme.txt.

The infpub.dat is capable of performing lateral movement via WMI or SMB. Harvested credentials provided by an embedded Mimikatz executable facilitate the infection of other systems on the network. The malware contains lists of common usernames, passwords, and named pipes that it can use to brute-force other credentials for lateral movement.

If one of four Dr.Web antivirus processes is present on the system, file encryption is not performed. If the malware is executed with the “-f” command line argument, credential theft and lateral movement are bypassed.

The dispci.exe binary interacts with the DiskCryptor driver (cscc.dat) to install the malicious bootloader. If one of three McAfee antivirus processes is running on the system, dispci.exe is written to the %ALLUSERSPROFILE% directory; otherwise, it is written to C:\Windows. The sample is executed on system start using a scheduled task named rhaegal.

A 32 or 64-bit DiskCryptor driver named cscc.dat facilitates disk encryption. It is installed in the :\Windows directory as a kernel driver service named cscc.

The infpub.dat contains a checksum algorithm like the one used in EternalPetya. However, the initial checksum value differs slightly: 0x87654321 in infpub.dat, 0x12345678 in EternalPetya. infpub.dat also supports the same command line arguments as EternalPetya with the addition of the “-f” argument, which bypasses the malware’s credential theft and lateral movement capabilities.

Both samples utilize the same series of wevtutil and fsutil commands to perform anti-forensics: 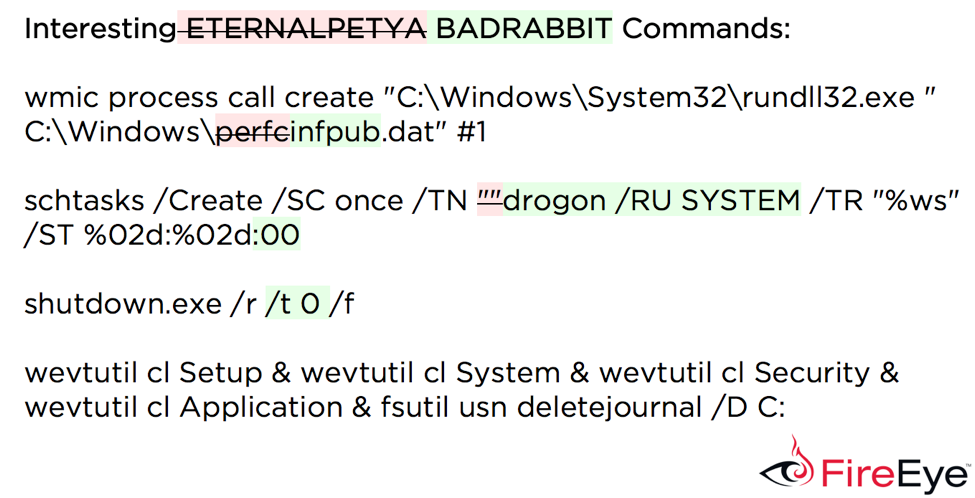 We would like to thank Edward Fjellskål for his assistance with research for this blog.

Command: \system32\rundll32.exe C:\Windows\infpub.dat,#1 15
Description: Runs the primary ransomware component of BADRABBIT. Note that “15” is the default value present in the malware and may be altered by specifying a different value on command line when executing install_flash_player.exe.