During an investigation, the FLARE team came across an interesting Python malware sample (MD5: 61a9f80612d3f7566db5bdf37bbf22cf ) that is packaged using py2exe. Py2exe is a popular way to compile and package Python scripts into executables. When we encounter this type of malware we typically just decompile and read the Python source code. However, this malware was different, it had its bytecode manipulated to prevent it from being decompiled easily!

In this blog we’ll analyze the malware and show how we removed the obfuscation, which allowed us to produce a clean decompile. Here we release source code to our bytecode_graph module to help you analyze obfuscated Python bytecode (https://github.com/fireeye/flare-bytecode_graph). This module allows you to remove instructions from a bytecode stream, refactor offsets and generate a new code object that can be further analyzed.

Py2exe is a utility that turns a Python script into an executable, which allows it to run on a system without a Python interpreter installed. Analyzing a Py2exe binary is generally a straightforward process that starts with extracting the Python bytecode followed by decompiling the code object with a module such as meta or uncompyle2. Appendix A contains an example script that demonstrates how to extract a code object from a Py2exe binary.

When attempting to decompile this sample using uncompyle2, the exception shown in Figure 1 is generated. The exception suggests the bytecode stream contains code sequences that the decompiler is not expecting.

Using the example script from Appendix A, we can view the disassembly of the code object to get a better idea what is causing the decompiler to fail. Figure 3 contains a portion of the disassembly produced by running script on this sample.

Looking closer at the disassembly, notice there are several unnecessary bytecode sequences that have no effect on the logic of the code. This suggests that a standard compiler did not produce the bytecode. The first surprising bytecode construct is the use of NOPs, for example, found at bytecode offset 0. The NOP instruction is not typically included in compiled Python code because the interpreter does not have to deal with pipelining issues. The second surprising bytecode construct is the series of ROT_TWO and ROT_THREE instructions. The ROT_TWO instruction rotates the top two stack items and the ROT_THREE rotates the top three stack items. By calling two successive ROT_TWO or three ROT_THREE instructions, the stack is returned to the same state as before the instruction sequence. So, these sequences have no effect on the logic of the code, but may confuse decompilers. Lastly, the LOAD_CONST and POP_TOP combinations are unnecessary. The LOAD_CONST instruction pushes a constant onto the stack while the POP_TOP removes it. This again leaves the stack in its original state.

These unnecessary code sequences prevent decompiling bytecode using modules such as meta and uncompyle2. Many of the ROT_TWO and ROT_THREE sequences operate on an empty stack that generates errors when inspected because both modules use a Python List object to simulate the runtime stack. A pop operation on the empty list generates exceptions that halt the decompilation process. In contrast, when Python interpreter executes the bytecode, no checks are made on the stack before performing operations on it. Take for example ROT_TWO from ceval.c in Figure 4.

Looking at the macro definitions for TOP, SECOND, SET_TOP and SET_SECOND from ceval.c in Figure 5, the lack of sanity checks allow these code sequences to execute without stopping.

Now that the types of obfuscation have been identified, the next step is to clean the bytecode in hopes of getting a successful decompile. The opmap dictionary from the dis module is very helpful when manipulating bytecode streams. When using opmap, instructions can be referenced by name rather than a specific bytecode value. For example, the NOP bytecode binary value is available with dis.opmap[‘NOP’].

Appendix B contains an example script that replaces the ROT_TWO, ROT_THREE and LOAD_CONST/POP_TOP sequences with NOP instructions and creates a new code object. The disassembly produced from running the script in Appendix A on the malware is shown in Figure 6.

At this point, the disassembly is somewhat easier to read with the unnecessary instruction sequences replaced with NOPs, but the bytecode still fails to decompile. The failure is due how uncompyle2 and meta deal with exceptions. The problem is demonstrated in Figure 7 with a simple script that includes an exception handler.

In this blog I’ve demonstrated how to remove a simple obfuscation from a Python code object using the bytecode_graph module. I think you’ll find it easy to use and a perfect tool for dealing with tricky py2exe samples. You can download bytecode_graph via pip (pip install bytecode-graph) or from the FLARE team’s Github page: https://github.com/fireeye/flare-bytecode_graph.

An example script that removes the obfuscation discussed in this blog can be found here: https://github.com/fireeye/flare-bytecode_graph/blob/master/examples/bytecode_deobf_blog.py.Hashes identified that implement this bytecode obfuscation:

Appendix A: Python script to extract and disassemble Py2exe resource 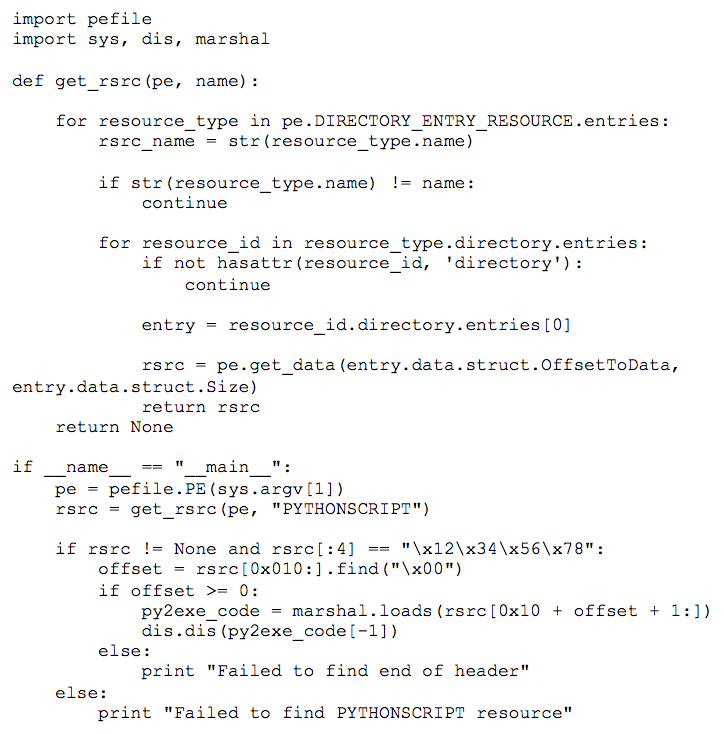 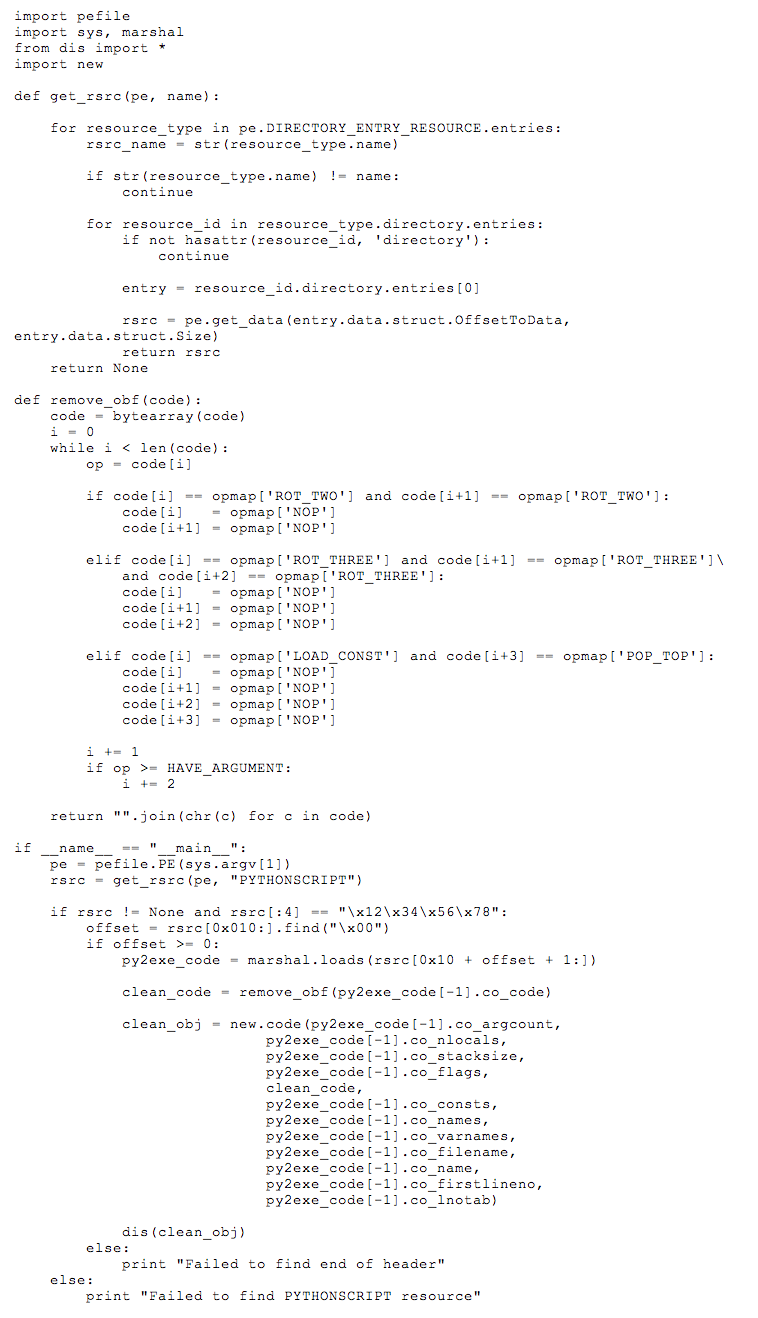