Within the past several months, FireEye has observed financially-motivated threat actors employ tactics that focus on disrupting business processes by deploying ransomware in mass throughout a victim’s environment. Understanding that normal business processes are critical to organizational success, these ransomware campaigns have been accompanied with multi-million dollar ransom amounts. In this post, we’ll provide a technical examination of one recent campaign that stems back to a technique that we initially reported on in April 2018.

Between May and September 2019, FireEye responded to multiple incidents involving a financially-motivated threat actor who leveraged compromised web infrastructure to establish an initial foothold in victim environments. This activity bared consistencies with a fake browser update campaign first identified in April 2018 – now tracked by FireEye as FakeUpdates. In this newer campaign, the threat actors leveraged victim systems to deploy malware such as Dridex or NetSupport, and multiple post-exploitation frameworks. The threat actors’ ultimate goal in some cases was to ransom systems in mass with BitPaymer or DoppelPaymer ransomware (see Figure 1).

Due to campaign proliferation, we have responded to this activity at both Mandiant Managed Defense customers and incident response investigations performed by Mandiant. Through Managed Defense network and host monitoring as well as Mandiant’s incident response findings, we observed the routes the threat actor took, the extent of the breaches, and exposure of their various toolkits.

Knock, Knock: FakeUpdates are Back!

In April 2018, FireEye identified a campaign that used compromised websites to deliver heavily obfuscated Trojan droppers masquerading as Chrome, Internet Explorer, Opera, and/or Firefox browser updates. The compromised sites contained code injected directly into the HTML or in JavaScript components rendered by the pages which had been injected. These sites were accessed by victim users either via HTTP redirects or watering-hole techniques utilized by the attackers.

Since our April 2018 blog post, this campaign has been refined to include new techniques and the use of post-exploitation toolkits. Recent investigations have shown threat actor activity that included internal reconnaissance, credential harvesting, privilege escalation, lateral movement, and ransomware deployment in enterprise networks. FireEye has identified that a large number of the compromised sites serving up the first stage of FakeUpdates have been older, vulnerable Content Management System (CMS) applications.

You Are Using an Older Version…of our Malware

The FakeUpdates campaign begins with a rather intricate sequence of browser validation, performed before the final payload is downloaded. Injected code on the initial compromised page will make the user’s browser transparently navigate to a malicious website using hard-coded parameters. After victim browser information is gleaned, additional redirects are performed and the user is prompted to download a fake browser update. FireEye has observed that the browser validation sequence may have additional protections to evade sandbox detections and post-incident triage attempts on the compromise site(s).

The redirect process used numerous subdomains, with a limited number of IP addresses. The malicious subdomains are often changed in different parts of the initial redirects and browser validation stages.

After clicking the ‘Update’ button, we observed the downloading of one of three types of files:

Figure 3 provides a snippet of JavaScript that provides the initial download functionality.

When the user opens the initial FakeUpdates downloader, the Windows Scripting Host (wscript.exe) is executed and the following actions are performed:

The backdoor and banking-trojan payloads described above have been identified as Dridex, NetSupport Manager RAT, AZOrult, and Chthonic malware. The strategy behind the selective payload delivery is unclear; however, the most prevalent malware delivered during this phase of the infection chain were variants of the Dridex backdoor.

After the end user executes the FakeUpdates download, the victim system will send a custom HTTP POST request to a hard-coded Command and Control (C2) server. The POST request, depicted in Figure 4, showed that the threat actors used a custom HTTP request for initial callback. The Age HTTP header, for example, was set to a string of 16 seemingly-random lowercase hexadecimal characters.

The HTTP Age header typically represents the time in seconds since an object has been cached by a proxy. In this case, via analysis of the obfuscated code on disk, FireEye identified that the Age header correlates to a scripted “auth header” parameter; likely used by the C2 server to validate the request. The first HTTP POST request also contains an XOR-encoded HTTP payload variable “a=”.

The C2 server responds to the initial HTTP request with encoded JavaScript. When the code is decoded and subsequently executed, system and user information is collected using wscript.exe. The information collected from the victim system included:

This activity is nearly identical to the steps observed in our April 2018 post, indicating only minor changes in data collection during this stage. For example, in the earlier iteration of this campaign, we did not observe the collection of the script responsible for the C2 communication. Following the system information gathering, the data is subsequently XOR-encoded and sent via another custom HTTP POST request request to the same C2 server, with the data included in the parameter “b=”. Figure 5 provides a snippet of sample of the second HTTP request.

Figure 6 provides a copy of the decoded content, showing the various data points the malware transmitted back to the C2 server.

After receiving the system information, the C2 server responds with an encoded payload delivered via chunked transfer-encoding to the infected system. This technique evades conventional IDS/IPS appliances, allowing for the second-stage payload to successfully download. During our investigations and FireEye Intelligence’s monitoring, we recovered encoded payloads that delivered one of the following:

During this process, the victim system downloads and executes nircmdc.exe, a utility specifically used during the infection process to save two system screenshots. Figure 10 provides an example command used to capture the desktop screenshots.

The PNG screenshots of the infected systems are then transferred to the C2 server, after which they are deleted from the system. Figure 11 provides an example of a HTTP POST request, again with the custom Age and User-Agent headers.

Interestingly, the screenshot file transfers were neither encoded nor obfuscated, as with other data elements transferred by the FakeUpdates malware. As soon as the screenshots are transferred, nircmdc.exe is deleted.

All Hands on Deck

In certain investigations, the incident was far from over. Following the distribution of Dridex v4 binaries (botnet IDs 199 and 501), new tools and frameworks began to appear. FireEye identified the threat actors leveraged their Dridex backdoor(s) to execute the publicly-available PowerShell Empire and/or Koadic post-exploitation frameworks. Managed Defense also identified the FakeUpdates to Dridex infection chain resulting in the download and execution of PoshC2, another publicly available tool. While it could be coincidental, it is worth noting that the use of PoshC2 was first observed in early September 2019 following the announcement that Empire would no longer be maintained and could represent a shift in attacker TTPs. These additional tools were often executed between 30 minutes and 2 hours after initial Dridex download. The pace of the initial phases of related attacks possibly suggests that automated post-compromise techniques are used in part before interactive operator activity occurs. 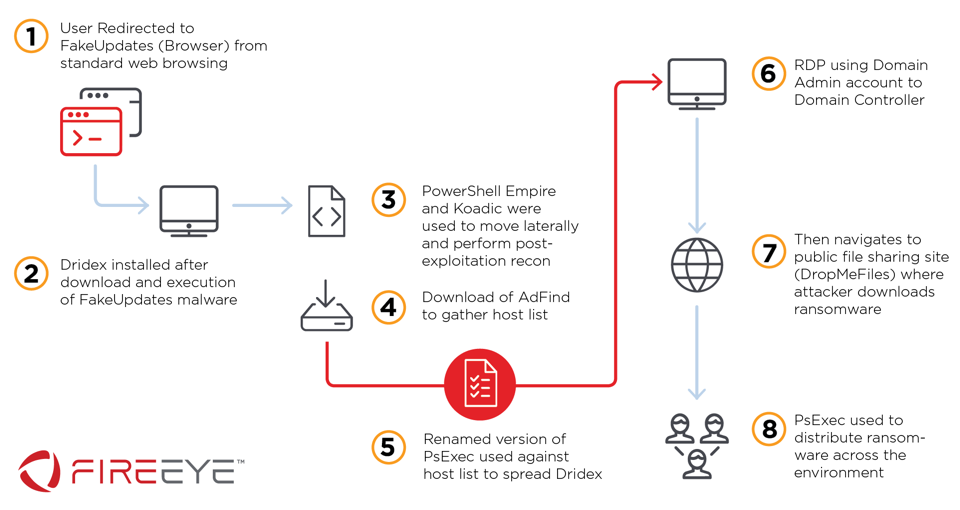 We identified extensive usage of Empire and C2 communication to various servers during these investigations. For example, via process tracking, we identified a Dridex-injected explorer.exe executing malicious PowerShell: a clear sign of an Empire stager:

In the above example, the threat actors instructed the victim system to use the remote server 185.122.59[.]78 for command-and-control using an out-of-the-box Empire agent C2 configuration for TLS-encrypted backdoor communications.

During their hands-on post-exploitation activity, the threat actors also moved laterally via PowerShell remoting and RDP sessions. FireEye identified the use of WMI to create remote PowerShell processes, subsequently used to execute Empire stagers on domain-joined systems. In one specific case, the time delta between initial Empire backdoor and successful lateral movement was under 15 minutes. Another primary goal for the threat actor was internal reconnaissance of both the local system and domain the computer was joined to. Figure 13 provides a snippet of Active Directory reconnaissance commands issued by the attacker during one of our investigations.

Within these investigations, FireEye identified the deployment BitPaymer or DoppelPaymer ransomware. While these ransomware variants are highly similar, DoppelPaymer uses additional obfuscation techniques. It also has enhanced capabilities, including an updated network discovery mechanism and the requirement of specific command-line execution. DoppelPaymer also uses a different encryption and padding scheme.

The ransomware and additional reconnaissance tools were downloaded through public sharing website repositories such as DropMeFiles and SendSpace. Irrespective of the ransomware deployed, the attacker used the SysInternals utlity PSEXEC to distribute and execute the ransomware.

Notably, in the DoppelPaymer incident, FireEye identified that Dridex v2 with the Botnet ID 12333 was downloaded onto the same system previously impacted by an instance of Dridex v4 with Botnet ID 501. Within days, this secondary Dridex instance was then used to enable the distribution of DoppelPaymer ransomware.  Prior to DoppelPaymer, the threat actor deleted volume shadow copies and disabled anti-virus and anti-malware protections on select systems. Event log artifacts revealed commands executed through PowerShell which were used to achieve this step (Figure 15):

Figure 15: Event log entries related to the uninstallation of AV agents and disablement of real-time monitoring

The DoppelPaymer ransomware was found in an Alternate Data Stream (ADS) in randomly named files on disk. ADSs are attributes within NTFS that allow for a file to have multiple data streams, with only the primary being visible in tools such as Windows Explorer. After ransomware execution, files are indicated as encrypted by being renamed with a “.locked” file extension. In addition to each “.locked” file, there is a ransom note with the file name “readme2unlock.txt” which provides instructions on how to decrypt files.

Ransomware? Not In My House!

Over the past few years, we have seen ransomware graduate from a nuisance malware to one being used to extort victim networks out of significant sums of money. Furthermore, threat actors are now coupling ransomware with multiple toolkits or other malware families to gain stronger footholds into an environment. In this blog post alone, we witnessed a threat actor move through multiple toolsets - some automated, some manual - with the ultimate goal of holding the victim organization hostage.

Ransomware also raises the stakes for unprepared organizations as it levels the playing field for all areas of your enterprise. Ransomware proves that threat actors don’t need to get access to the most sensitive parts of your organization – they need to get access to the ones that will disrupt business processes. This widens your attack surface, but luckily, also gives you more opportunity for detection and response. Mandiant recently published an in depth white paper on Ransomware Protection and Containment Strategies, which may help organizations mitigate the risk of ransomware events.

The following indicator set is a collective representation of artifacts identified during investigations into multiple customer compromises.

FireEye detects this activity across our platforms, including named detections for Dridex, Empire, BitPaymer and DoppelPaymer Ransomware. As a result of these investigations, FireEye additionally deployed new indicators and signatures to Endpoint and Network Security appliances.  This table contains several specific detection names from a larger list of detections that were available prior to this activity occurring.

A huge thanks to James Wyke and Jeremy Kennelly for their analysis of this activity and support of this post.

Catch an on-demand recap on this and the Top 5 Managed Defense attacks this year.