Pro-PRC Influence Campaign Expands to Dozens of Social Media Platforms, Websites, and Forums in at Least Seven Languages, Attempted to Physically Mobilize Protesters in the U.S.

In June 2019, Mandiant Threat Intelligence first reported to customers a pro-People’s Republic of China (PRC) network of hundreds of inauthentic accounts on Twitter, Facebook, and YouTube, that was at that time primarily focused on discrediting pro-democracy protests in Hong Kong. Since then, the broader activity set has rapidly expanded in size and scope and received widespread public attention following Twitter’s takedown of related accounts in August 2019. Numerous other researchers have published investigations into various aspects of this activity set, including Google’s Threat Analysis Group, Graphika, the Australian Strategic Policy Institute, the Stanford Internet Observatory and the Hoover Institution, and the Centre for Information Resilience.

Since we began tracking the campaign in mid-2019, we have observed multiple shifts in its tactics, many of which have been reported on publicly elsewhere, including the use of artificially generated photos for account profile pictures and the promotion of a wide variety of narrative themes related to current events, including multiple narratives related to the COVID-19 pandemic, narratives critical of Chinese dissident Guo Wengui and his associates, and narratives related to domestic U.S. political issues. However, other evolutions in the network’s activity do not appear to have been reported widely, and our aim with this blog post is to provide early warning of two significant developments that we believe are important to monitor despite the limited impact of the network so far:

Activity Expands to Dozens of Social Media Platforms, Websites, and Forums in at Least Seven Languages

Similar to previously reported activity that has spanned Facebook, Twitter, and YouTube, we have observed coordination between suspected accounts in the network across 30 social media platforms and over 40 other websites and online forums. These accounts have posted similar, and in many cases identical messaging and engaged in the coordinated sharing, commenting on, and liking of text, image, and video content. For example: 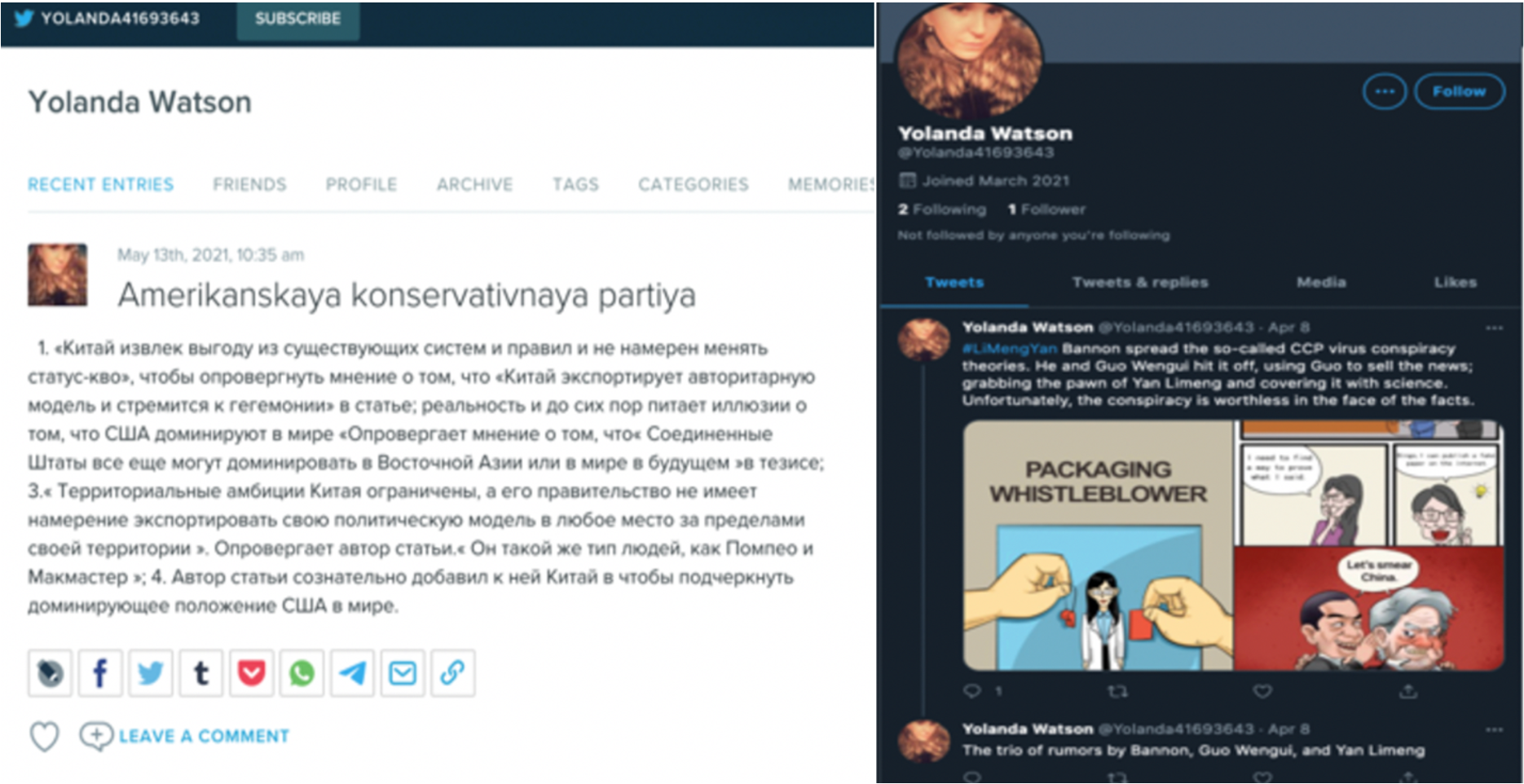 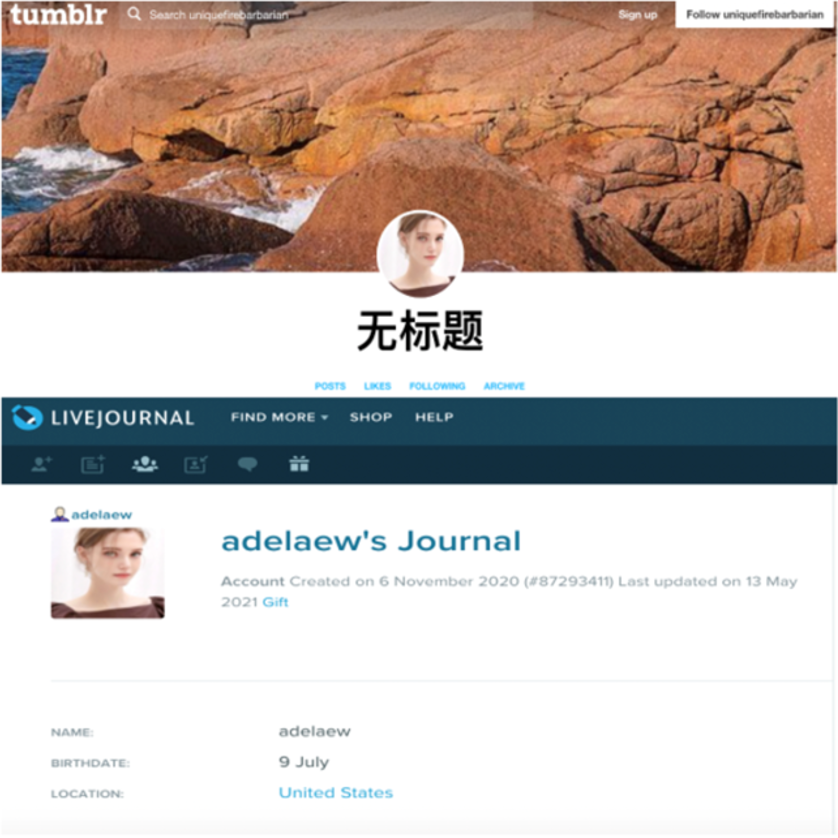 We have observed extensive promotion of Russian, German, Spanish, Korean, and Japanese-language content on U.S. and non-U.S.-based platforms, in addition to the typical English and Chinese-language activity that has been widely reported on. This represents a significant development in our collective understanding of this pro-PRC activity set. For example: 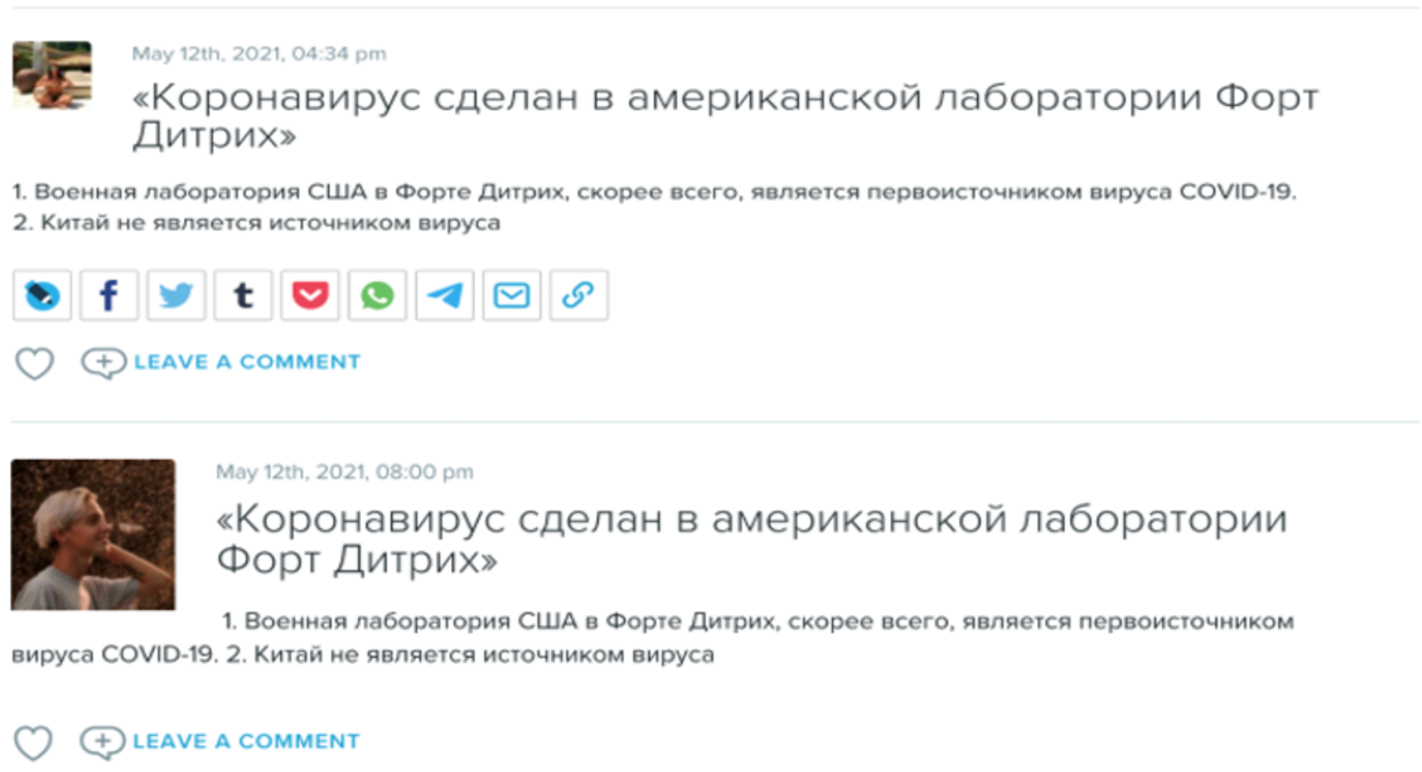 Figure 5: LiveJournal accounts promote identical text in Russian claiming that "U.S. Ft. Detrick was the source of COVID-19" and that "China is not the source of the virus" 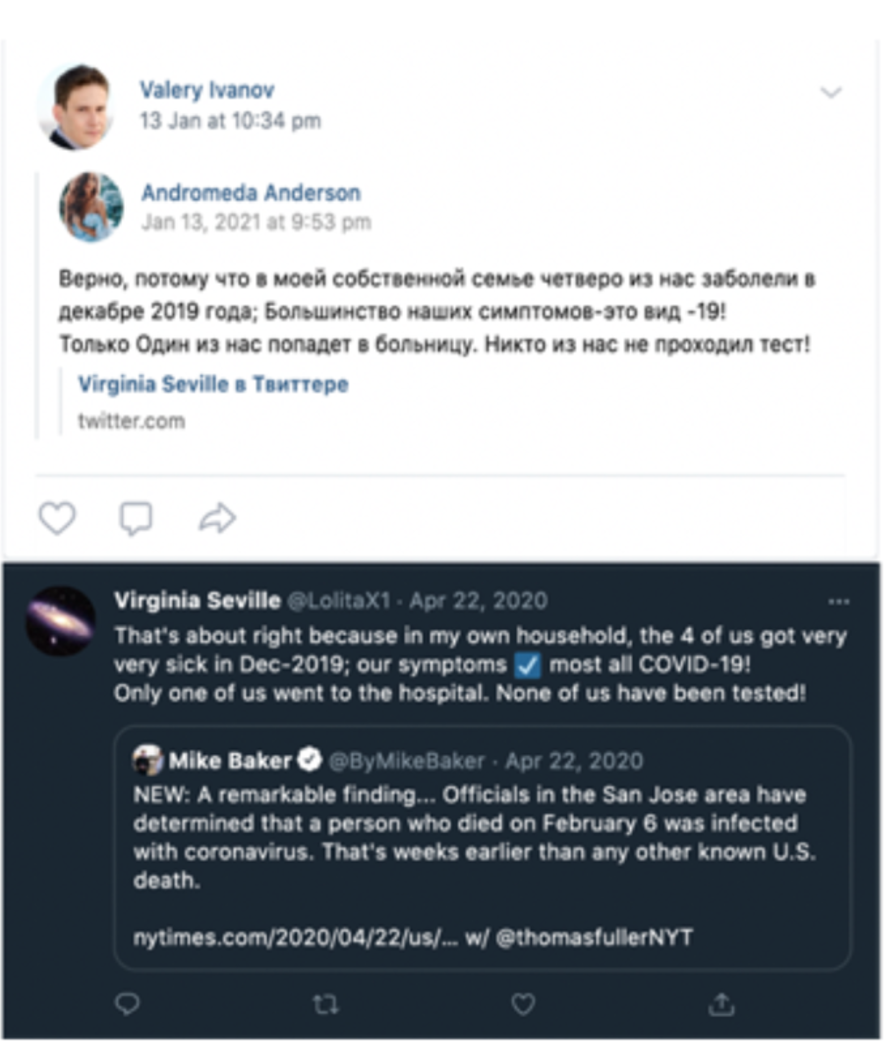 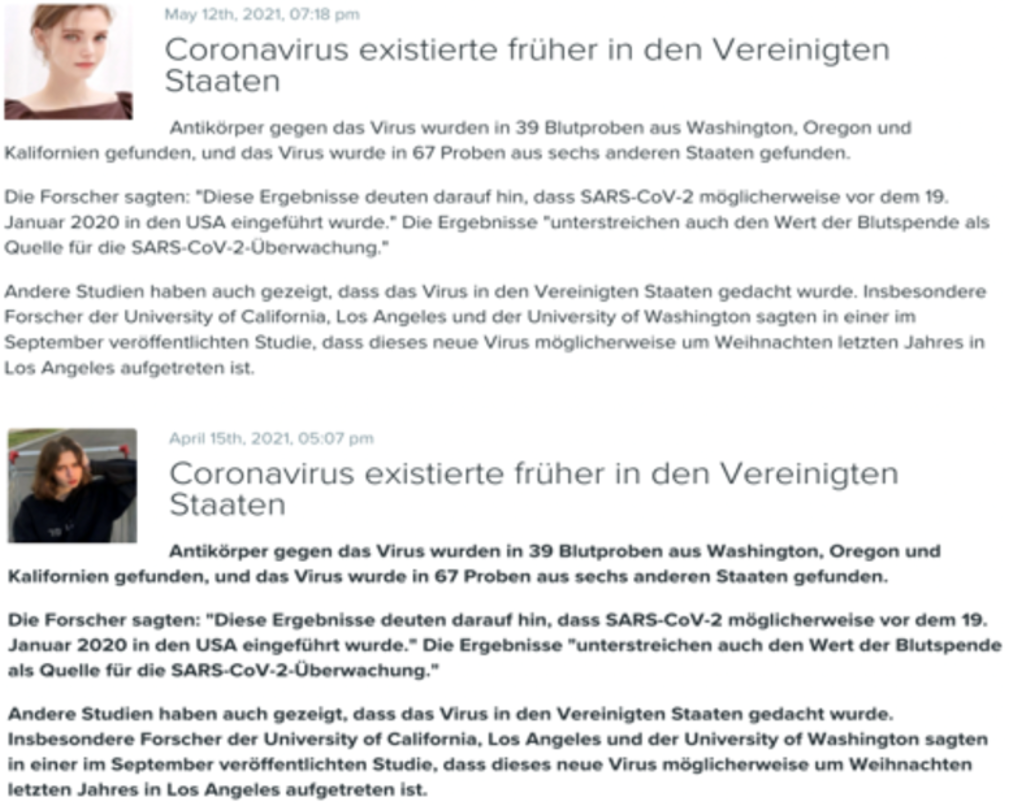 Figure 7: LiveJournal accounts post identical text in German claiming that COVID-19 may have appeared in the U.S. before Jan. 19, 2020

Figure 8: Spanish-language Taringa accounts post articles and text to cast doubt about the origin of COVID-19 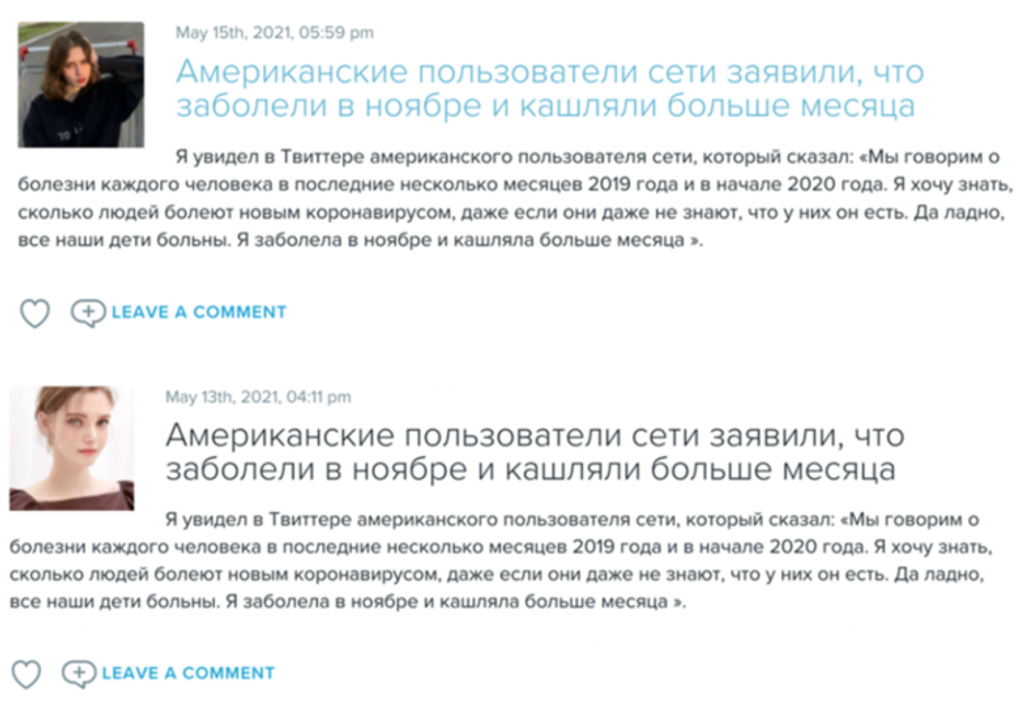 Attempts to Physically Mobilize Protestors in the U.S.

In April 2021, thousands of posts in languages including English, Japanese, and Korean, images, and videos were posted across multiple platforms by accounts we assess to be part of this broader activity set that called on Asian Americans to protest racial injustices in the U.S. (Figure 10). The accounts specifically called on Asian Americans to protest on April 24 in New York City and “fight back” against the purported “rumors” caused by Dr. Li-Meng Yan, Guo Wengui, and Steve Bannon, and in some instances provided an address that they claimed Guo lived at. 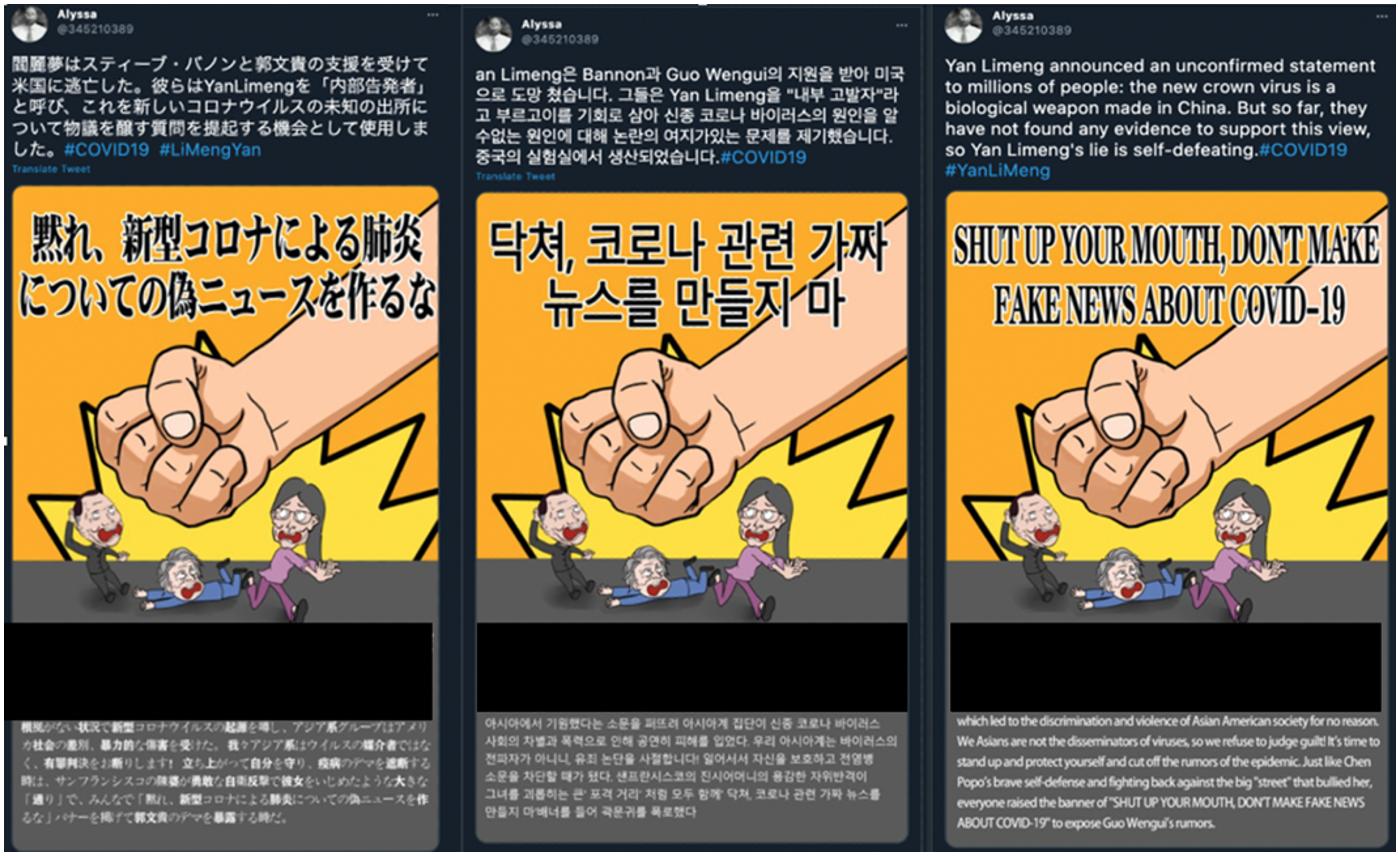 Figure 10: Twitter account calls for physical protests in Japanese (left), Korean (middle), and English (right) (Note: We have censored the address listed by the accounts)

Subsequently, we observed posts by accounts in the network portray the advocated April 24 New York City protest as a success, claiming that Asian Americans, other minority groups, and Caucasian protestors attended (Figure 11). Other posts claimed that these protesters were met by Guo Wengui’s “supporters”, who “violently assault[ed]” them. As part of this claim of success, we observed a manipulated image in which the face of Dr. Yan was superimposed onto a sign held by a purported protestor and shared across nearly all the social media platforms and forums that we have seen leveraged as part of this broader activity set. We identified the image to be a manipulation of a picture taken at a rally against racial discrimination that took place in Jamestown, NY, on or around April 23, 2021 (Figure 12).

Figure 11: A Medium account (left) and an Underlined account (right) post identical text claiming Asian Americans protested racial violence in the U.S. The sign being held in the picture on the left has been photoshopped 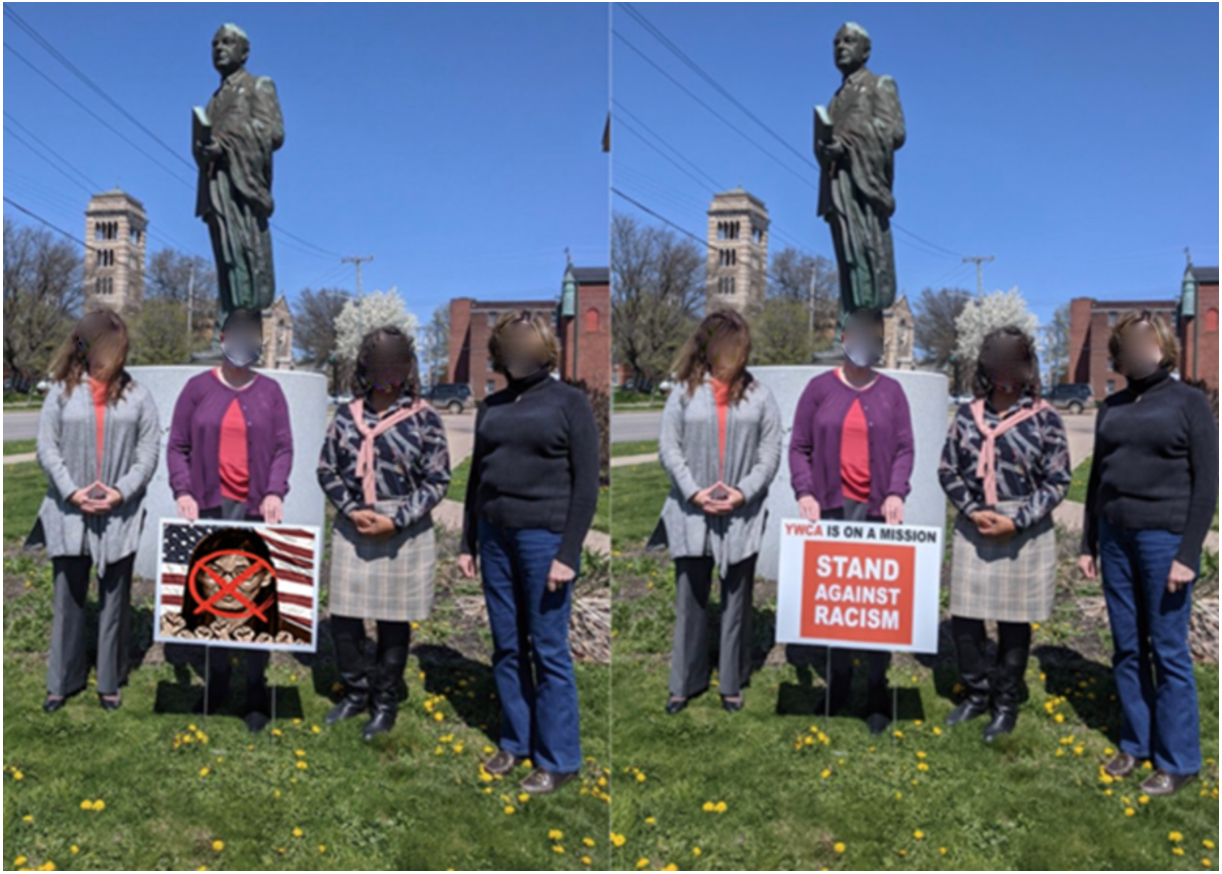 Figure 12: Photoshopped image of Dr. Yan's face on a sign (left), shared across nearly all platforms (original photo on the right)

Despite these claims, we have not observed any evidence to suggest that these calls were successful in mobilizing protestors on April 24. However, it does provide early warning that the actors behind the activity may be starting to explore, in however limited a fashion, more direct means of influencing the domestic affairs of the U.S. We believe it is important to call attention to such attempts and for observers to continue to monitor for such attempts in future.

Our aim with this blog post is to provide early warning of two significant developments that we believe are important to monitor for despite the limited impact of this pro-PRC campaign thus far. First, the activity is taking place not just on the big three social media giants, but on at least 30 social media platforms and dozens of additional websites and forums, and in languages including not just English and Chinese, but also German, Russian, Spanish, Korean, and Japanese. This suggests that the actors behind the campaign have significantly expanded their online footprint and appear to be attempting to establish a presence on as many platforms as possible to reach a variety of global audiences. Second, the attempt to physically mobilize protesters in the U.S. provides early warning that the actors responsible may be starting to explore more direct means of influence and may be indicative of an emerging intent to motivate real-world activity outside of China’s territories.