The FLARE On Challenge Solutions: Part 1 of 2

In July, the FireEye Labs Advanced Reverse Engineering (FLARE) team created and released the first FLARE On Challenge to the community. A total of 7,140 people participated and showed off their skills, and 226 people completed the challenge. Everyone who finished the challenge received a challenge coin to commemorate their success. 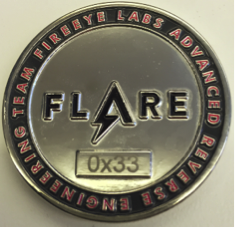 We are releasing the challenge solutions to help those who didn’t finish improve their skills. There are many different ways to complete each challenge, so we waited to see what solutions people devised. We found the following solutions posted online and recommend taking a look at these as well to see how the later challenges can be solved in different ways.

In this initial issue of the blog series, we focus on the first five challenges, which were easier. We hope that by starting with easier solutions, people who have never reversed before can still benefit. Below is a write up of how to solve the first five challenges, written as if we’d never seen them before. The goal of each challenge is to find a key in the form of an email address that allows you unlock the next challenge. The archive of challenges have been posted to the challenge website.

Stay tuned for Part 2 where we show two different and interesting ways of solving Challenge 6.

The first challenge starts out pretty easy. When we drop the binary into CFF Explorer (or equivalent PE tool), it informs us that we’re dealing with a PE 32-bit .NET Assembly, so we can run it in an x86 Windows VM and see what happens. A decode button appears to have two functions: transforming Bob Ross into Bob Doge, and converting the top label into some unprintable strings. We drop the binary into ILSpy (or equivalent .NET decompiler) to get an idea what this decode button is doing. The decompiled code is shown in the top of Figure 1. 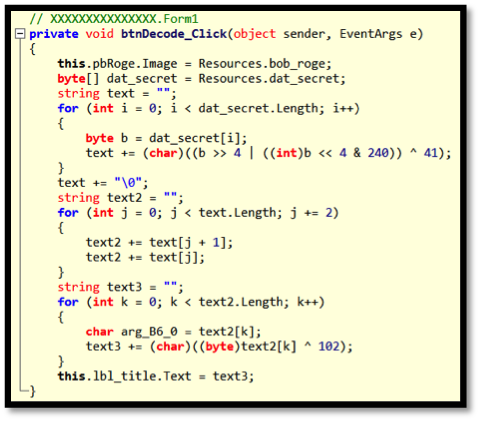 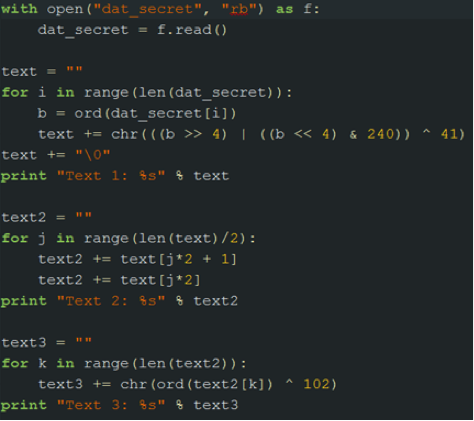 The button changes the image to Bob Doge, and encodes a resource string twice and sets the label text to the result. If we save out the resource that is being manipulated, we can play around with it. The Python code in the right side of Figure 1 is the decode button re-implement to help us figure out what we are dealing with. When this Python code is run, the following is printed out showing the solution to Challenge 1 as “Text 1” in the output.

Pulling this out of the image leaves us with:

This reveals more obfuscation! Applying the same trick again results in the following lines of code:

So from this, we decide we should base64 decode the $_ string and, lo and behold, we have our key.

This is a string that is made out of mixing hexadecimal and ordinals. By writing a quick decoder for this conversion we get a11DOTthatDOTjava5crapATflareDASHonDOTcom. We then replace “DOT”, “AT”, and “DASH” with the corresponding character and get the key: a11.that.java5crap@flare-on.com.

Challenge 3 is an x86 PE file. We drop the binary into IDA Pro to see what it shows us:

The function sub_401000 looks interesting to us since all of the other functions called before it have symbols associated with them, and 0×401000 is the beginning of the code section, commonly where the beginning of any user-written code exists.

The binary is calling the location of the first byte it moved onto the stack, so we’ll need to deal with a buffer of shellcode. At this point static analysis is much more work than dynamic, so we drop this into a debugger.

We set a breakpoint at the call eax above and let the code run to catch the program before it calls into the shellcode. Now we can dump the stack memory to a file and analyze it in IDA Pro as shown in Figure 3. All of the following analysis could be done in the debugger, but we decided to show the steps in IDA Pro. 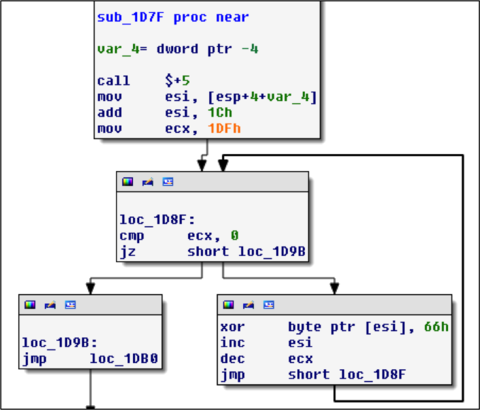 Figure 3 shows a loop decoding everything after the jmp instruction by XORing each byte with 0×66. We decided to write a script to do the decoding for us rather than running it and dumping it in the debugger again.

When we run this script we get the following decoded string:

Additional code that has also been decoded, showing another decoding loop:

This time the encoding is a multi-byte XOR, so we write another script:

Scripts like this are often needed when reversing malware to decode strings used by the program. After this script executes it seems we’ve gotten further because we have another string that has been decoded:

And following this we now have more code as shown in Figure 4. 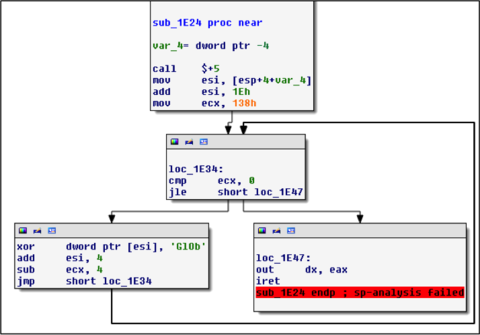 What a surprise: another deccoding loop. By now, we’ve gotten pretty decent at writing these scripts, so here’s another one:

After this one executes we have more code to look at. This is the last decoding step using the key of “omg is it almost over?!?” This time the script looks like:

And we have our next key.

We could have come to the same conclusion by stepping through the whole binary in a debugger. But we wanted to have a bit of fun in IDA Pro scripting!

Challenge 4 requires that we examine a PDF. Let’s see what happens when we open this in an unpatched version of Adobe Reader that is highly exploitable, like 9.0 as shown in Figure 5. 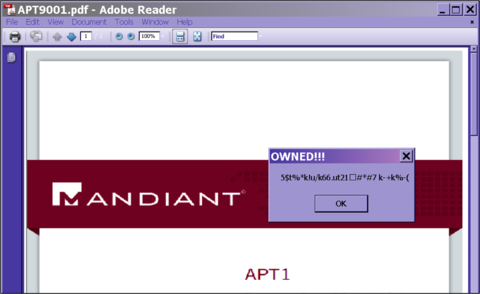 It looks like the malicious PDF popped open a message box, so we set a breakpoint on MessageBoxA and MessageBoxW. Figure 6 shows the arguments on the stack when this breakpoint hits.

From the strings that are on the stack, we know that we are in the correct call to MessageBoxA. So if we trace back to the address that made this call, we find the following shellcode block:

Examining this in IDA shows the following:

So it looks like we have strings that are being encoded on the stack in some way. Since our breakpoint hit after this code has already run, we can go back and force the debugger to execute this code again to see what is revealed on the stack. 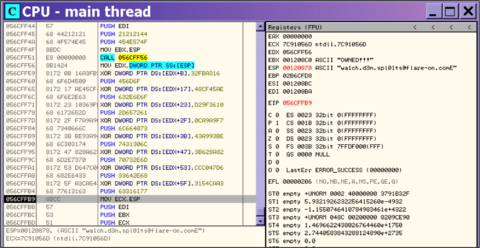 Figure 7: Breakpoint to reveal the key

And there it is in Figure 7 as referenced by ESP. So we’ve found the next key.

Challenge 5 is a Windows PE DLL, so we drop it into IDA Pro and started jumping around the functions to see if anything interesting pops out. After bouncing around a bit, we stumble upon this huge function starting at 0×10001240. This function takes no arguments and appears to build a giant stack string. Since it takes no arguments, we tried setting eip to the entry of the function in a debugger and running it, which reveals the image shown in Figure 8. 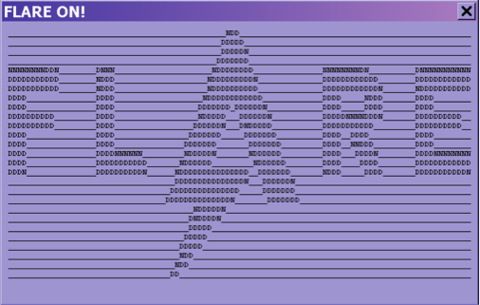 Interesting, but it doesn’t seem to contain the key. Checking the cross references to this function leads us to the function shown in Figure 9. 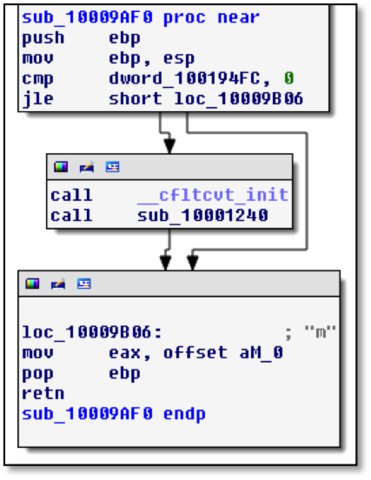 That doesn’t tell us much by itself. We see this function checks a global variable to determine whether to open a MessageBox, and then the letter “m” is returned. Cross references to this function show a function whose graph is shown in Figure 10.

This function is huge and contains some sort of if/else statement. At the top of it we see the following bit of code.

An if/else statement based on GetAsyncKeyState sounds like we are dealing with a keylogger. It appears that pressing the “m” key causes a specific global variable to be set, which later causes the program to pop up a message box. So what is this global variable, dword_100194FC, and what sets it? Cross references to this are shown in Figure 11.

The global variable is initialized to zero, and then some other function sets it to one. The function that sets it is sub_10009B60 and is shown in Figure 12. 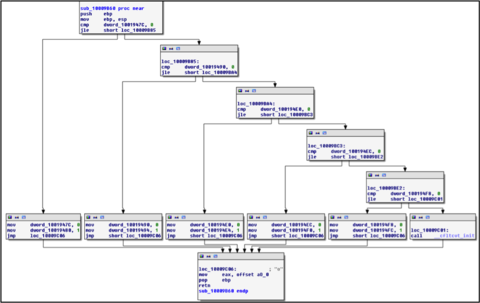 This appears to be the function that handles the keystrokes for the “o” key. The last condition checks if dword_100194F8 is set, and if so then set dword_100194FC to 1. Those global variables are in sequence, so from here we play on a hunch and look at the memory addresses of the global variables and start naming them as follows: 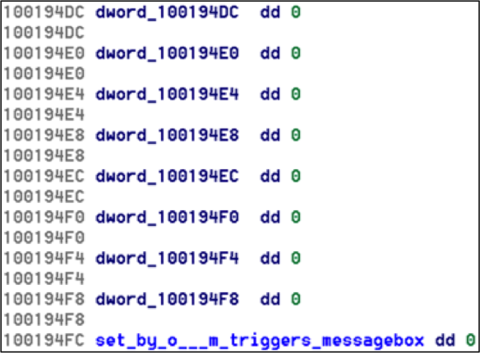 As we start doing this, a pattern starts to emerge: 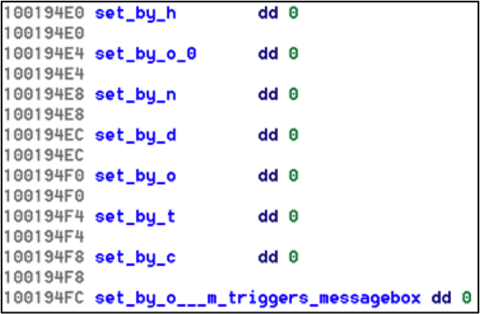 We notice that the pattern “dotcom” emerge so we can do this for the rest of the global variables (which are a series of global variables controlling a state machine based on key strokes) and we get the final key: l0gging.Ur.5tr0ke5@flare-on.com.